A delay in the $45.5 billion project on Carey Island may deal a blow to Malaysia and its maritime ambitions, but it could be a boon for Singapore as a key port in the region.

But falling volumes at Malaysia's main Port Klang due to global shipping alliances moving operations to Singapore have caused MMC Corp and the government to hit the brakes on the development.

Such a move, said industry observers, will keep a cap on competition in the region.

"For the short term, it will mean one less potential competitor for incumbent ports in the region - Port of Tanjung Pelepas, Port Klang, and Port of Singapore - that vie for the container trans-shipment market," said Ocean Shipping Consultants director Jason Chiang.

CTI Consultancy partner Andy Lane noted that there is already sufficient competition from both Port Klang and Port of Tanjung Pelepas to keep Singapore on its toes. Still, Singapore has become "very adept" at defending its market-leading position over the years, with an efficient and attractive trans-shipment product for key global container ship operators, added Mr Lane.

He expects box traffic here for the year to top last year's figure by around 8 per cent, mainly due to new volumes acquired from other ports in Malacca following the reshuffling of alliances among major container lines in April. The Port of Singapore handled 27.7 million twenty-foot equivalent (TEUs) units in the first 10 months of 2017, up 8.5 per cent from the same period last year.

And Singapore is not resting on its laurels, noted Mr Victor Wai, lead ports analyst at Drewry Financial Research Services: "The 65 million TEU Tuas mega port is on track, and the Maritime and Port Authority of Singapore is proactively entrenching the maritime ecosystem in Singapore." 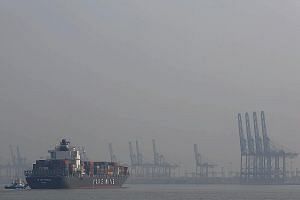 Malaysia's decision to push back the development of Carey Island was "a prudent move", said Ocean Shipping's Mr Chiang. "It takes into account expansion plans already in place for Port Klang and Singapore's Tuas mega port, which could result in an oversupply of port capacity in the region."

CTI's Mr Lane said now that the alliance transformation is completed following the industry consolidation and likely to remain in place for at least the next two or three years, it is unlikely for any of the Malacca ports to see large volume spikes or decreases. "Growth will be organic," he said.

"The infrastructure for a mega development like Carey Island is extremely capital-intensive... and within such a long time horizon, there are just too many macro trends which can disrupt the expected business case and projected paybacks," added Mr Lane. "Malaysia needs to be wary of the 'China debt trap' risks, as have been experienced by Sri Lanka. So to cease progress on Carey Island is the sensible thing to do today."