SINGAPORE - Now more than ever before, economic ties with the United States rely not just on what the latter's government does, but also on "the US private sector as an indispensable partner", Foreign Minister Vivian Balakrishnan said on Wednesday (March 13) at an event held by the American Chamber of Commerce in Singapore (AmCham).

He cheered the US' continued commitment to Singapore and South-east Asia, noting moves such as the recent US-Asean Smart Cities Partnership, and highlighting Asean's potential in Asia as a youthful region whose "demographic dividend has not yet been harvested".

The stock of US foreign direct investment in Singapore alone is about US$242 billion (S$328.3 billion), he noted.

US companies' enduring and growing interest in Asean was evident in the latest annual Asean Business Outlook Survey of US companies operating in the region, launched by Dr Balakrishnan at Wednesday's event.

The proportions were similar for the 117 respondents operating in Singapore. However, the reasons for Asean's growing importance differed. Overall, availability of raw materials was the top reason, cited by three-quarters of all respondents. In Singapore, regional integration was the top reason, cited by 76 per cent of firms operating here, compared with 59 per cent globally.

In Singapore, the sectors that respondents identified as being most promising for US businesses were banking and finance (named by 33 per cent); software, IT and telecommunications (32 per cent); and consulting and e-commerce (27 per cent each). 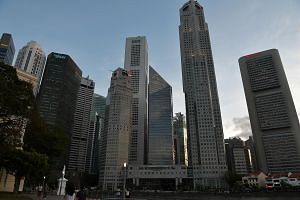 US businesses in Singapore very confident about growth potential in Asean: Survey

Yet even while highlighting both countries' strong economic ties, Dr Balakrishnan added that Singapore is "watching with great interest, in fact with great concern" the ongoing US-China trade talks.

"For us as an open economy, as a city-state in which our trade volumes are three times our GDP (gross domestic product), we obviously have a lot riding on these negotiations in which we have no say," he said.

With the survey having been conducted from April to June 2018 amid trade tensions, 46 per cent of respondents in Singapore expected US trade actions against China to have a negative impact on their operations. Most of the rest expected no effect, while 3 per cent anticipated a positive effect.