SINGAPORE - Singapore is expected to experience the sharpest economic slowdown in South-east Asia, with gross domestic product (GDP) growth slowing from 3.1 per cent in 2018 to 1.9 per cent this year, as its export outlook deteriorates following more tariff hikes from the US and China, said the Institute of Chartered Accountants in England and Wales (ICAEW) in a report on Tuesday (June 4).

"As a small and open economy that is heavily dependent on exports, Singapore's growth will likely be the most negatively affected," the report noted.

Added Mr Mark Billington, ICAEW regional director for Greater China and South-east Asia: "Renewed trade tensions between the United States and China come at a time when export growth across the region is already facing a difficult external environment. With its links to China and dependence on exports, we expect Singapore to experience the sharpest slowdown in GDP growth across the region, with its economy likely to dip into recession in 2020, should external conditions further deteriorate."

This is in tandem with its forecast that economic growth in South-east Asia is also expected to decelerate, on the back of weaker Chinese import demand, a slowdown in the global ICT (information and communications technology) cycle, and an increase in trade protectionism over the past year.

It said regional growth is expected to slow from 5.3 per cent in 2018 to 4.8 per cent this year, before moderating to 4.7 per cent in 2020, amid slowing global trade and escalating US-China trade tensions.

Ms Sian Fenner, ICAEW economic adviser and Oxford Economics lead Asia economist, said: "We expect exports and overall economic growth to continue to come under further pressure, as the re-escalation of trade tensions between US and China is unlikely to ease any time soon.

"With export volumes already on the downside since the start of the year, any further increase in trade tensions between the world's two largest economies will likely see a much more prominent slowdown in regional growth."

Singapore's economy saw growth of 1.2 per cent in the first quarter this year - the lowest growth rate in almost 10 years. This was a tad lower than the Government's initial estimate of 1.3 per cent, and down from the previous quarter's results, which were revised downwards from 1.9 per cent to 1.3 per cent. First-quarter GDP growth also came in below economist expectations of 1.5 per cent. 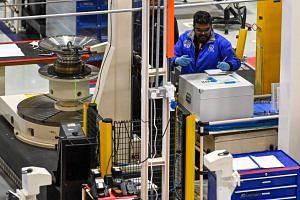 While Singapore's sequential growth was up by 0.9 per cent quarter on quarter, the details were mixed, the report highlighted.

Household spending remained resilient and non-residential and infrastructure construction were strong, even though growth has eased and demand for durable goods, such as motor vehicles, is particularly weak, the report said.

"In addition, the impact of weaker global trade and US-China trade tensions are increasingly being felt. Exports were 2.1 per cent lower than a year ago in Q1 2018, while concerns over the outlook for external demand saw investment in machinery and equipment fall and firms opting to reduce stocks. Looking ahead, the outlook for exports is weak, following more tariff hikes by the US and China."

That said, the ICAEW expects Singapore's domestic demand to provide some cushion to the negative impact from weaker exports.

"Indeed, a sharp policy reversal by the US Federal Reserve and subdued inflation across the region have opened the door for easier monetary policy across South-east Asia."

"In Singapore, the outlook for construction - outside of the residential sector - over the next 18 months is positive, given the continued recovery in non-residential construction and ongoing public infrastructure projects such as the North-South Corridor. However, businesses are likely to remain cautious given the weaker global trade backdrop, resulting in more subdued investments in machinery and equipment moving forward."

It added that against the backdrop of a more challenging export outlook and benign inflationary pressures, the Monetary Authority of Singapore is likely to remove some of last year's appreciation bias in its S$Neer (Singapore dollar nominal effective exchange rate), which is a trade-weighted basket of currencies against the Singapore dollar.

"As such, the USD/SGD is expected to end 2019 at around 1.37, which is consistent with the Singapore dollar moving towards the centre of its policy band," it said.

The ICAEW's forecast for Singapore's 2019 growth is also within the range of the Ministry of Trade and Industry's (MTI) expectation for GDP to come in at 1.5 per cent to 2.5 per cent this year, compared with the previously estimated 1.5 per cent to 3.5 per cent range.

Earlier in May, the MTI slashed the upper end of its annual growth forecast as official data showed the economy clocking its slowest growth in nearly a decade during the first three months of this year. Economists noted that the MTI is striking a more downbeat tone in its outlook, flagging the external environment as "challenging" and expecting a "sharp slowdown" in the manufacturing sector.