HONG KONG (BLOOMBERG) - The worst may soon be over for an electronics slump that has dogged Asia's export-driven economies.

While South Korean semiconductor shipments plunged 28 per cent by value in July, they rose 15 per cent by volume. The nation's inventories of semiconductors fell a second straight month in June, a sign that orders are picking up.

"The question is when South Korea's exports will bottom out," said Stephen Lee, an economist at Meritz Securities Co in Seoul. "It could be the third quarter, either August or September."

The slump in tech exports has been one of the biggest drags on Asia's manufacturing base. Key gauges for factory sentiment continue to show contractions for output in Japan, South Korea, Malaysia and Taiwan. Real investment growth across Asia slowed to 2 per cent in the first quarter from 7 per cent a year ago, according to S&P Global Ratings.

Industry announcements across Asia signal a possible recovery, which is good news for a region that accounts for more than 60 per cent of global economic growth.

Apple's suppliers - dominated by Asia-based factories - are preparing to produce components for up to 75 million new iPhones in the second half, roughly the same number as a year earlier, Bloomberg News reported.

Apple's sales forecast of US$61 billion-US$64 billion for the current quarter not only topped analysts' estimates but also signaled year-over-year revenue could grow, thanks to healthy demand for iPhones. 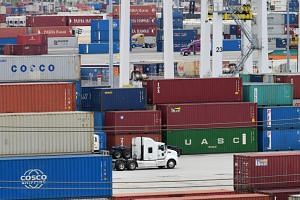 Another reason for optimism is that Samsung will begin selling its Galaxy Fold smartphone in September. The world's biggest handset maker hopes the foldable phones, coupled with fifth-generation wireless networks, will kick the mobile industry back into a boom by giving consumers a compelling reason to upgrade their devices.

"It's been pretty awful but probably not as bleak going forward as it has been," Sian Fenner, lead Asia economist at Oxford Economics, said of the tech cycle.

For sure, it's too early to say for certain the worst is over.

After all, Singapore's electronics exports fell in June to their lowest since at least 1997. In Japan, shipments of electronic components and chip-making equipment to China both dropped by well over 20 per cent in June.

Tuuli McCully, head of Asia-Pacific economics at Scotiabank in Singapore, said that while the electronics sector may bottom late this year, "significant downside risks remain."

In addition to the US-China trade war and a slowing global economy, demand for new smartphones is plateauing. Rising tensions between Japan and South Korea could also hurt. Japan has already slapped curbs on exports to South Korea of materials vital to manufacturing of semiconductors and displays, and things could get worse.

"Even before the trade war hit, there was a bit of a moderation in the tech cycle," said Khoon Goh, head of Asia research at Australia & New Zealand Banking Group Ltd. in Singapore. "Smartphones have reached a saturation point."

Still, optimists argue that comparisons with robust growth numbers for electronics exports from a year ago is making the weakness look worse than it is.

Beyond smartphones, Asia is also leading spending on the Internet of Things, accounting for around 36 per cent of global spending this year, followed by the US and Western Europe with 27 per cent and 21 per cent, respectively.

"Initial shocks from the trade war might be behind us," Goldman economists wrote in a note.