DOHA (BLOOMBERG) - Qatar said it will leave Opec next month in a move that threatens to fracture the group's unity just as it tries to maintain a global coalition to control the oil market.

Qatar, a member since 1961, is leaving to focus on its natural gas production and has informed the Organization of Petroleum Exporting Countries of its decision, Energy Minister Saad Sherida Al-Kaabi told a news conference in Doha on Monday. A spokesman for the group declined to comment.

Qatar is Opec's 11th-biggest oil producer, accounting for less than 2 per cent of total output, so its departure is most significant for any potential impact on the group's cohesion. The surprise announcement comes just days ahead of a pivotal meeting, as Opec members and allies weigh joint production cuts to stabilize a market that suffered its worst month in more than a decade. It's the first Middle Eastern nation to leave Opec.

Relations within the organization are often frayed, including between Qatar and the group's de facto leader, Saudi Arabia. A Saudi-led coalition implemented a blockade on Qatar in June last year, severing diplomatic, trade and transport links based on accusations that stemmed from its funding of extremist groups and relations with Iran.

Qatar was the first country to join Opec after the five founding nations - Iran, Iraq, Kuwait, Saudi Arabia and Venezuela - formed the group in 1960. The organization first gained global recognition in 1973 when it cut production and instituted an embargo against companies allied with Israel in its war with Egypt, worsening a global recession.

More recently, the group and several allies including Russia agreed in late 2016 to cut production by about 1.8 million barrels a day to reduce a global glut of crude that had depressed prices from more than US$100 a barrel to less than US$30. After steadily rising through 2017 and 2018, prices have plunged again recently, with Brent dropping by 22 per cent in November, the worst month since October 2018. Futures traded at US$62.04 a barrel at 7:11am in London. 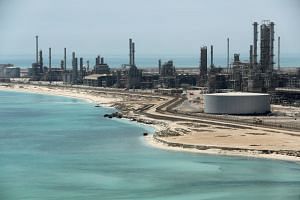 In the history of the cartel, three nations have left the organisation, although two later re-joined. Ecuador left in 1992 after an economic and political crisis, suspending its membership until 2007. Gabon left in 1995 but returned in 2016. Indonesia suspended its Opec membership in 2016 after the country's had become a few years earlier a net importer of oil.

"In our pursuit to strengthen Qatar's position as a reliable and trustworthy energy supplier across the globe, we had to take steps to review Qatar's role and contributions on the international energy scene,' Mr Al-Kaabi said in a statement. "It has become clear to us that achieving our ambitious strategy will undoubtedly require focused efforts, commitment and dedication to maintain and strengthen Qatar's position as the leading LNG producer."