Trump's early-afternoon tweet announcing the tariffs on another US$300 billion (S$400 billion) in goods sent investors to the exits and left the Dow Jones Industrial Average 1.1 per cent lower at the closing bell at 26,583.42.

Trump's announcement of the 10 per cent tariff to take effect on Sept 1 jolted stocks from a rally following the Federal Reserve's move on Wednesday to cut interest rates for the first time in more than a decade.

At the White House, Trump told reporters was "not concerned" by the negative reaction among investors, saying he had anticipated it.

The news prompted a broad-based selloff but fell especially hard on retailers such as Best Buy, which lost 10.8 per cent, Target, which tumbled 4.4 per cent and Macy's, which sank 6.8 per cent.

Amazon and Walmart, which are seen as having more clout with suppliers, also declined, but by less than 1 per cent. 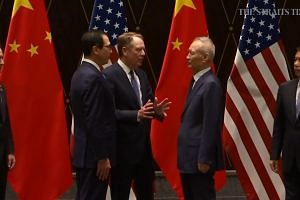 "What we are seeing here is a real decline in retail, so we know the decline is definitely related to the China tweet because the next round of tariffs is going to impact the consumer goods more than the previous ones," said Maris Ogg of Tower Bridge Advisors.

Other companies with large China presences also fell, including Caterpillar, down 3.7 per cent and Boeing, down 2.1 per cent.

Deere & Company fell 2.7 per cent. The company, which sells farm equipment, has pointed to the loss of agricultural exports to China as a drag on US agricultural investment.