LONDON (AFP) - Ryanair plunged deeper into crisis on Wednesday (Sept 27) with the cancellation of more flights, threatening the travel plans of another 400,000 customers, while the low-cost airline dropped its bid for Italy's Alitalia.

The Dublin-based carrier has been plagued by a pilot shortage that has led it to axe thousands of flights - and has now extended cancellation plans to early 2018.

In addition, it will operate 10 fewer aircraft from April 2018, further affecting its growth plans.

The latest move will "eliminate all risk of further flight cancellations, because slower growth creates lots of spare aircraft and crews across Ryanair's 86 bases this winter", it said in a statement.

Taking more flights out of service means that Ryanair will be able to "roster all of the extra pilot leave necessary" in October, November and December. 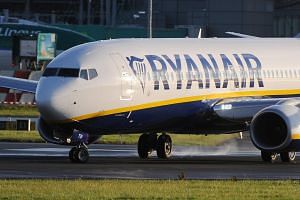 It also plans to roll out a series of seat sales for winter 2017 as it is "confident that there will be no further roster related cancellations".

And the airline sprang another surprise with the withdrawal of its bid to buy Italian carrier Alitalia, after announcing a non-binding offer in July.

"In order to focus on repairing this rostering problem this winter, Ryanair will eliminate all management distractions, starting with its interest in Alitalia," it said in a statement.

"We have notified the Alitalia bankruptcy commissioners that we will not be pursuing our interest in Alitalia or submitting any further offers for the airline."

Meanwhile, the new batch of cancellations announced on Wednesday will affect 34 routes, including London-Belfast, Hamburg-Oslo and Bucharest-Palermo.

"While over 99 per cent of our 129 million customers will not have been affected by any cancellations or disruptions, we deeply regret any doubt we caused existing customers... about Ryanair's reliability, or the risk of further cancellations," chief executive Michael O'Leary said.

"We sincerely apologise to those customers who have been affected by last week's flight cancellations, or these sensible schedule changes announced today," he added.

Ryanair had already dropped 2,100 flights in the six weeks to the end of October as it struggled with landing planes on time, reportedly owing mainly to a shortage of pilots.

Weather issues and strikes have also hampered the group's performance.

The cancellations jeopardised the travel plans of 315,000 customers, but the carrier has now been forced to more than double the number of passengers affected.

Britain's Civil Aviation Authority (CAA) said on Wednesday that it was preparing to take enforcement action against Ryanair for failing to provide its customers with the proper information about their rights.

It said Ryanair had not corrected O'Leary's statement that it was not obliged to re-route passengers on other airlines, and was not telling customers it was obliged to refund expenses they might incur, such as meals, hotels and transfer costs to facilitate re-routed flights.

"We are seeking to ensure that Ryanair's customers will receive the correct and necessary information, to make an informed choice about an alternative flight," the CAA chief executive Andrew Haines said.

Ryanair said on Wednesday that it had emailed all passengers affected by the latest cancellations, offering them alternative flights or a full refund. They have also received a 40 euro travel voucher.

There was no immediate indication of how costly the latest cancellations would be to the company.

Ryanair is scrapping 40 to 50 flights daily - "less than two per cent" of its flying programme - to address problems caused also by air traffic control delays, strikes and weather disruption.

But it has admitted that it has also been hit by requiring pilots and cabin crew to take outstanding holiday entitlement by the end of the year as part of new company rules.

"For the... Ryanair customers who are unaffected by these (latest) flight cancellations and schedule changes, this slower rate of growth means that from today there is no risk of further roster-related" grounding of planes, the airline said.