KUALA LUMPUR (BLOOMBERG) - Malaysia's ringgit fell for a fourth day as Brent crude dropped below US$50 a barrel for the first time since January, weighing on the net oil exporter's revenue.

The ringgit's weakness on Monday (Aug 3) suggested the central bank was "stepping away from supporting" the currency, said Khoon Goh a strategist at Australia & New Zealand Banking Group.

A report on Wednesday (Aug 5) may show Malaysia's exports contracted in June for a fifth month in 2015. The prospect Iran will flood an already oversupplied market once sanctions are lifted helped contribute to Brent's 53 per cent slide in the past 12 months. 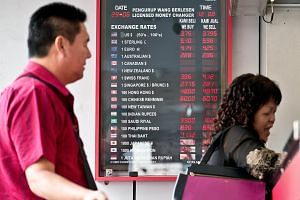 Many Malaysians stocking up on Singapore dollars, US dollars as ringgit weakens

"With oil prices falling due to concern over increased Iranian supply, this will put further downward pressure on the ringgit," said Singapore-based Goh. "We have seen depreciation pressure that had been building up."

The currency has dropped 9.5 per cent this year in Asia's worst performance due to a combination of slumping oil prices, a probe into funds linked to state investment company 1Malaysia Development Bhd that has embroiled Prime Minister Najib Razak and the outlook for higher US interest rates.

The nation's foreign-exchange reserves fell to a five-year low in July, signaling the central bank may have bought the local currency to try and stem its losses. Bank Negara Malaysia is discouraging local and global financial institutions from entering into transactions that would result in selling the ringgit, the Star newspaper reported on Friday, citing dealers it did not identify.

Wednesday's report may show overseas shipments decreased 2 per cent in June from a year earlier, compared with a 6.7 per cent contraction in May, according to the median forecast of 15 economists surveyed by Bloomberg. Reserve holdings declined to US$100.5 billion as of July 15 and data for the following two weeks are due on Friday.