SEOUL (THE KOREA HERALD/ASIA NEWS NETWORK) - Negotiations are underway on US President Donald Trump's demand for a five-fold increase in South Korea's payment for the cost of stationing 28,500 US troops here.

The talks in Washington and Seoul may be settled before the year-end.

However, the preposterous US demand has raised the average South Korean's skepticism about the alliance by as much as five times.

It could be the famous "art of the deal" of the American businessman-turned-president, but it simply borders on insanity to seek a 500 per cent increase in a counterpart's contribution in an annual review of a contract.

Even a 50 per cent raise over a period of five years would still be considered exorbitant in normal business practices.

The US demand comes after South Korea's contribution saw a steady annual increase of single-digit percentages over the past years.

The first question arising among Koreans is: What will happen if we refuse to comply? Are they going to leave, possibly by increments of several hundreds or thousands of troops? What about the congressional binding on pulling troops out of South Korea?

The only reason Trump has given for the $5 billion (S$6.80 billion) bill in his Twitter politics is that South Korea is a rich country that can afford the high price.

This is coming from the head of state of the richest nation in the world. 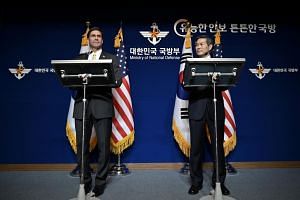 US, South Korea break off defence cost talks amid backlash over US$5 billion demand

Trump chose South Korea as a warm-up for negotiations with Japan, the EU and Saudi Arabia.

Among these allies, the EU quickly reached settlement with a significant raise over the coming five years.

South Korea's counteroffer cannot but hover around the level of a 10 percent increase.

Its supra-partisan parliamentary delegation to Washington told US Congress leaders that under South Korea's fiscal system, like in any other democracy, the legislature simply cannot pass a budget bill containing such a sudden increase in external expenses.

South Korea recently took a step back in its dispute with Japan over the compensation of World War II forced labourers.

Under the US' pressure, Seoul made a last-minute concession on the General Sharing of Military Information Agreement with Japan, amid the ongoing negotiations on United States Forces Korea (USFK) costs.

Of course, there is the larger question of denuclearising North Korea, which vitally affects the security of South Korea, the US and Japan, tied by two separate alliances.

However, it does not seem to be a major factor for Trump in considering his deal with the South on the USFK costs.

In a few weeks, we will hear a joint announcement that will reveal one of the following:

1) South Korea's capitulation with the doubling of its share - 500 percent is inconceivable under any circumstances.

2) A US concession with a slightly higher increase rate compared with last year.

3) A final breakdown, which means continuation of the present scale for the time being until Washington makes a major decision on the status and function of its forces stationed in South Korea.

Pentagon denies US is considering pulling troops from South Korea

The "troop pullout card" has been in the hands of the American president since the Jimmy Carter era.

Senior State and Defence Department officials have hinted at downsizing the USFK by several thousand, but they should know the reduced impact of such a "warning" on the South Korean public, given the changing sentiment toward the US military presence, particularly since new administrations took office in Washington and Seoul.

The "tripwire" role and the concept of "automatic intervention" that had long been recognised for the USFK as a deterrence against war on the Korean Peninsula have nearly been forgotten since the southward relocation of its outfits began years ago.

But the US forces still maintain formidable firepower on the ground, in the air and at sea - not to mention the nuclear umbrella they stand for.

And there is the vast Camp Humphreys in Pyeongtaek, Gyeonggi Province, reputedly the largest US military base outside US territory.

It was expanded from a logistics depot over several years to house most of the USFK's ground elements.

Together with the nearby Osan Air Base, the US garrison will serve as the base of strategic mobile force to be sent to any flash point that calls for US military intervention.

For some time, the South Korean government had opposed the shift of the USFK status that could possibly affect the security system on the peninsula.

But the two allies have reached a tacit compromise in parallel with the issue of transferring the operational control of the allied forces here from the United States to South Korea to be exercised both in times of peace and war.

The cost for the construction of the sprawling military city was split half and half between the two allies, with South Korea providing the pricey land-site in the central zone and workforce.

The US side covered other expenses for the project with part of the Korean contribution to the cost of stationing the USFK.

Therefore, more Korean money was actually spent, but 50-50 has been established on the account book as a financial formula to maintain the military alliance, which started in the Korean War.

We have been doing our part in the bilateral contract, continuously increasing our portion in bearing the cost of keeping the USFK on Korean soil, though their number has been reduced from over 300,000 at the end of the war to less than one-tenth of that now.

In the meantime, Korean blood was shed in the war in Vietnam and in the Middle East conflicts in fulfilment of the treaty alliance.

Trump thinks that a military alliance is a give-and-take deal rather than a framework of common values and interests. For a long time, we believed that alliance, if created out of necessity, builds up trust through mutual cooperation. That belief is being shaken by Trump's tweets.

Last month, a US negotiator walked out of a conference room without shaking the hands of his counterpart. In such circumstances, we can feel how the alliance has transformed.

The writer is a former editorial writer for The Korea Herald and was a longtime defence correspondent for The Korea Times. The paper is a member of The Straits Times media partner Asia News Network, an alliance of 24 news media organisations.