Tourists on package can attend rallies, engage with voters and even meet party candidates

Foreign tourists have always been drawn to India's rich historical tapestry, its diverse landscapes and cultures, and array of cuisines.

An Indian travel agency is now pitching the country's upcoming parliamentary elections as a tour option, offering visitors a chance to soak in the excitement of the world's largest democratic exercise.

The package includes the chance to attend rallies, engage with voters in rural and urban areas, and even meet political party candidates.

"The process of electing people's representatives in the world's largest democracy is almost like a festival. It's an experience like nowhere else," says Mr Manish Sharma, chairman of Akshar Travels, the agency that has launched the tour.

With about 900 million voters, India will elect its next federal government from April 11 to May 19. This drawn-out electoral process transforms the country every five years with campaign material festooned across the country, corner tea shops that come alive with political differences and enrapturing political rallies that attract crowds of hundreds of thousands.

This tourism initiative was started during the December 2012 state elections in Gujarat, drawing in those who visited the state during the peak winter tourist season. It was repeated in the 2014 parliamentary polls, which pulled in around 5,200 tourists.

Most of these visitors included researchers, media professionals, students and political analysts.

Mr Sharma says the number this year is expected to cross 10,000 with "positive inquiries" coming from the United States, France, Germany, Austria and Japan.

There are many different kinds of tourism across the world... Election tourism is one that is not available anywhere else.

MR MANISH SHARMA, chairman of Akshar Travels, which has launched tour packages focusing on the elections.

The tour has been showcased at major tourism expos in foreign capitals for the last six months.

"A lot of queries have come from people of Indian origin. Many are interested to visit Varanasi, the constituency Prime Minister Narendra Modi is contesting from," he adds.

Mr Modi has, in the past, supported this idea of converting India's elections into a tourism draw. Other popular locations include Lucknow, Delhi and Mumbai.

The package, which spans around a week and costs about US$450 (S$611, flights not included), covers different regions a tourist may want to visit. It combines regular sightseeing with popular electoral campaign schedules in and around these zones.

Access to political leaders and their events is not a problem, says Mr Sharma. "In fact, political candidates like the presence of a group of foreigners at the rally as it increases the attraction of the rally," he says.

Mr Hemesh Patel, a British citizen of Indian origin, joined the 2014 tour. Impressed by the "massive scale" of the election, he particularly remembers the way politics dominated conversations wherever he went and the manner in which party members canvassed support. 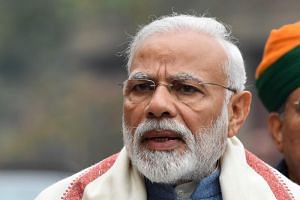 "There were some booths where people gathered every day to meet and greet one another and even to share free food," he tells The Straits Times.

"However, it is best if the tourist has an understanding of the local language or has access to a good translator so that he is able to understand the people's views better."

Besides obvious challenges that arise from a lack of good-quality tourism infrastructure across the country, the appeal of the election-tourism package is also confined by the fact that parliamentary elections are usually held in summer, when temperatures can soar close to 45 deg C in many parts of the country.

Security for foreign tourists among a crowd of thousands also poses a challenge for Akshar Travels and its partner agencies.

But Mr Sharma thinks India's parliamentary elections, which take place every five years, have immense untapped tourism potential. "If the ministries of external affairs and tourism pitch in and help develop this in an organised manner, we can generate at least 20 billion rupees (S$391 million) worth of revenue from election tourism," he says.

"There are many different kinds of tourism options across the world, whether it is sports, leisure, heritage or others. Election tourism is one that is not available anywhere else. Why don't we develop it into a business model?"