Critics have said the film, due for release on April 5, is blatant propaganda and an attempt to woo voters before they start going to the polls six days later in India's almost six-week election.

Congress, which hopes to unseat Mr Modi in the vote, said on Monday (March 25) that putting out the movie, PM Narendra Modi, would break election laws and that it should not hit cinemas until after voting ends on May 19.

"This is no artistic venture. It is a political venture and that is what we have told the Election Commission and should not be allowed," senior Congress figure and former minister Kapil Sibal told reporters.

The movie relates the Hindu right-wing leader's journey from his childhood days selling tea at a railway station to becoming chief minister of his home state Gujarat and leading his Bharatiya Janata Party (BJP) to a thumping victory against Congress in 2014 elections.

Under Indian election rules now in effect, the publication of any content deemed as campaign material - including advertisements, films and even social media - requires the Election Commission's prior approval.

Another election silence law bans all campaign material, even if approved by the commission, 48 hours from the opening of polls.

The commission said they have asked the makers of the Modi film to respond to the Congress's claims. 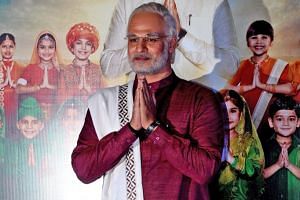 Hundreds of overseas Indians roped in to campaign for Modi

Its Bollywood producers would have to show that the film is an artistic rather than a political work.

The movie has been embroiled in another controversy within the Bollywood industry, with two top lyricists publicly denying penning songs for the soundtrack after their names were mentioned in the film poster.

The makers released a two-minute trailer last week of the film saying it is "based on true story", with Bollywood actor Vivek Oberoi playing Mr Modi through various stages of his life.

The trailer depicts Mr Modi as a child selling tea and his transformation to a young stick-wielding member of Hindu supremacist organisation Rashtriya Swayamsevak Sangh.

It also covers his days as a Hindu "sage" in the Himalayas, and later as a nationalistic politician issuing warnings to India's arch-rival Pakistan.

The trailer also shows Mr Modi lamenting over the deadly riots that erupted in Gujarat when he was chief minister in 2002.

Critics and victims' families have accused Mr Modi of doing little or nothing to stop days of rioting that left more than 1,000 people dead, a majority of them Muslims.