A few months later, the automaker finds itself on a lonesome road. In a nation of about 150 million drivers, only 130 Kona SUVs were sold to dealers through August.

That slow pace is emblematic of the difficulties carmakers face in establishing an electric foothold in the fourth-biggest auto market, even with committed government support.

Yet Kona's sticker price only kicks off the conversation about why EVs aren't gaining traction in India - there's also a lack of charging infrastructure, a reluctance by banks to finance purchases and an unwillingness among government departments to use EVs as directed.

Barely more than 8,000 EVs were sold locally during the past six years, according to data compiled by Bloomberg.

China sells more than that in two days, according to projections by research outfit BloombergNEF (BNEF).

"The affordability of electric cars in India is just not there," said R.C. Bhargava, chairman of Maruti Suzuki India, maker of the sales leader Alto. "I don't think the government or the car companies expect that in the next two to three years there will be any real buying of electric vehicles."

The segment still isn't making meaningful strides more than four years after the government started promoting cleaner vehicles for one of the world's most-polluted countries.

The potential of India's EV market can't be ignored.

There are only 27 cars for every 1,000 Indians, compared with 570 for the same number of Germans, giving global automakers an opportunity to challenge the dominance of Maruti - the unit of Japan's Suzuki Motor that sells every other car on local roads. 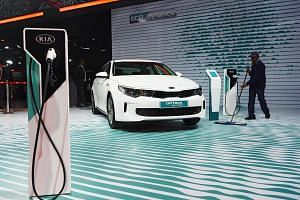 Maruti's not introducing its first EV until next year.

Tata Motors and Mahindra & Mahindra build some base-level electric cars, yet they have a limited range or are exclusively for government use.

The Kona gives Hyundai a first-mover advantage in a market where EVs may comprise 28 per cent of new vehicle sales by 2040, according to BNEF.

Not only Hyundai sees opportunity in Asia's third-largest economy.

MG Motor, the iconic British carmaker owned by China's SAIC Motor and Japan's Nissan Motor see EVs as a way to expand in the country.

"Somebody has to take the leadership, and it will trickle down," said Rajeev Chaba, managing director of MG Motor India, which plans to launch an electric SUV by December.

Right now, though, consumers pass over electric cars for bigger, longer-range and cheaper gas guzzlers, said Vinkesh Gulati, vice president of the Federation of Automobile Dealers Associations, which represents more than 80 per cent of automobile dealers in India.

More than half of the passenger vehicles sold in India last year cost US$8,000 or less, according to BNEF.

"Consumers care about EVs, the excitement is there," Mr Gulati said. "But that stops the moment we tell them the price."

Yet even for those who can afford the Kona, plugging in is problematic.

Nidhi Maheshwary, a 40-year-old finance professional working near New Delhi, wanted to buy an EV to show her children an example of environmental responsibility.

So when Hyundai launched the Kona, Mrs Maheshwary ordered one. Sounds easy, but it didn't turn out that way.

Almost immediately, she got into a spat with neighbors about charging the SUV in her apartment building's basement lot.

The residents' society said it posed a fire risk - even though Hyundai engineers and the fire department said it was safe.

So Maheshwary charges the car at her office while weighing potential recourse against those neighbours.

Hyundai offers two small chargers with the Kona, although it can take as many as 19 hours to fill up the vehicle.

India had an estimated 650 charging stations for cars and SUVs in 2018, according to BNEF.

China, the largest market for EVs, has about 456,000 charging points, official data shows.