But as results trickle in, polls show none of the top three parties winning a majority, paving way for horse-trading

KARACHI • Pakistanis voted yesterday in a closely fought election that would determine the course of the nuclear-armed nation central to US anti-terrorism efforts and China's global infrastructure ambitions.

Surveys show none of the top three parties winning a majority, paving the way for horse-trading to form a government. Results started trickling in within hours after polls closed at 6pm local time (9pm Singapore time), and the likely winner should be known by today.

Pakistan's powerful military - which has ruled for much of the nation's history - has faced accusations during the campaign of intimidating critics and reporters to elect a pliant government. It has denied the allegations.

The morning's voting was marred by a bomb blast near a polling station in Quetta that killed 31 people and injured about 70, Dr Wasim Baig, spokesman for Sandeman Provincial Hospital in Quetta, said by phone.

In a second attack in Balochistan, the military said a convoy on election duty was hit, killing three soldiers and an election worker, while local media reported a grenade attack in Hyderabad and an explosion in Larkana.

The army deployed around 370,000 troops and a heavy military presence could be seen across Karachi, Pakistan's largest city and financial hub, where soldiers stood guard inside and outside polling stations.

Mr Imran Khan, the celebrated former cricketer turned anti-corruption crusader, had the momentum heading into the election, and is seen as the military's top choice for prime minister despite his denials.

His main rival is a party helmed by former prime minister Nawaz Sharif, who has clashed repeatedly with the military over the years and was jailed this month on corruption charges, which he is appealing.

"For 30 years, I have seen my country go backwards," said Mr Nadir Khan, a 50-year-old IT businessman who travelled from Australia to vote for Mr Khan's Pakistan Tehreek-e-Insaf (PTI), or Movement for Justice.

"I'm not expecting things to change overnight, but he will change the course of the country - I wanted someone to shake up the system and he has done it already."

No matter who triumphs, Pakistan's next leader will need to grapple with the generals over control of foreign policy and national security - two areas that determine relations with the US and China.

They must also deal with a mounting economic crisis: Four currency devaluations since December have made it likely the next government will need to seek another International Monetary Fund bailout.

"While the army will continue to retain control, a pliant civilian government, which it will get in Khan, will allow it to have nearly unchecked power," said Mr Shailesh Kumar, Asia director with political risk firm Eurasia Group.

"This is consequential given that relations with India - and the world - are at all-time lows, and could be a catalyst for further bad behaviour, and in turn cause additional security challenges in the region."

Pakistan's army has long worried that a civilian government could make overtures to India and Afghanistan, ultimately reducing the need for a powerful military - and the largesse that comes with it.

Pakistan's military denies those claims and has sought to keep ties with the US from deteriorating further: it still allows the American military overland access to Afghanistan, for instance. Even so, any party that wins is likely to shift ever closer to China, which has offered more than US$60 billion (S$82 billion ) to finance Pakistan infrastructure projects.

There are 272 parliamentary seats out of 342 up for grabs, with 60 seats reserved for women and 10 for minorities. A party or coalition needs 137 seats to form the government.

A Gallup Pakistan poll early this month showed Mr Khan closing the gap with Sharif's party, which is campaigning on its record of boosting infrastructure spending, improving security and reducing power cuts.

Security has improved dramatically across Pakistan following a crackdown on militant groups in recent years. But analysts have long warned that Pakistan is not tackling the root causes of extremism and militants can still carry out spectacular attacks.

This was seen during this election season, with a string of bombings at political events - including the second-deadliest militant attack in Pakistan's history - that killed more than 180 people.

Analysts have warned that insurgents may be regrouping and seeking to reassert themselves after years of setbacks.

Pakistan's next government faces growing fears of a balance of payments crisis, with speculation mounting that it will have to seek its second bailout in five years from the International Monetary Fund. 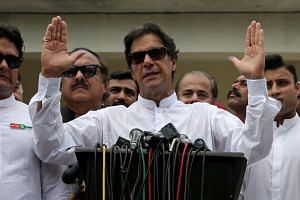 Pakistan's central bank is burning through foreign exchange reserves and devaluing the rupee, including by another 5 per cent this month, in a bid to bridge a widening trade deficit.

Pakistan increased its procurement of materials to help build a string of Chinese-backed infrastructure projects under a multibillion-dollar investment package with Beijing. The terms of the projects are opaque, leading to fears about Islamabad's ability to pay for them.

The economy has also been stung by higher oil prices.

Meanwhile, exports of products such as textiles have been hit by cheaper products from regional competitors, while foreign remittances - a major contributor to the economy - have also slowed.

Conservative Pakistan has one of the highest birth rates in Asia, at around three children per woman, according to the World Bank and government figures.

That has led to a fivefold increase in the population since 1960, now touching 207 million, draft results from last year's census show.

The boom is negating hard-won economic and social progress in the developing country, experts have warned. Analysts say that unless more is done to slow growth, the country's natural resources - particularly drinking water - will not be enough to support the population.

Official estimates show that by 2025, the country will face an "absolute scarcity" of water, with less than 500 cubic m available per person - just one-third of the water available in parched Somalia, according to the United Nations.

Political initiative will be essential to build infrastructure to reverse the course of the impending crisis. There is also little in the way of public education on water conservation.

Pakistan has spent roughly half its nearly 71-year history under military rule, and the imbalance of power between civilian governments and the armed forces has long been seen as an impediment to democracy and progress.

The next government will be tasked with meeting the country's challenges without upsetting this delicate balance of power.

A version of this article appeared in the print edition of The Straits Times on July 26, 2018, with the headline 'Imran Khan may have advantage in Pakistan polls'. Subscribe
Topics:
More
Whatsapp Linkedin FB Messenger Telegram Reddit WeChat Pinterest Print Copy permalink