For Pakistani cricket legend-turned-politician Imran Khan who is set to become the country's next prime minister, details about his private life, in particular his three wives, have always been tabloid fodder.

Dubbed "cricket's greatest playboy", his tall, dark and handsome image has led to him being "a favourite with women during his cricketing career", according to the London Evening Standard.

He finally bowed out from the party scene in 1995, when he married British heiress Jemima Goldsmith. He has since remarried twice.

Here is what you might want to know about the 65-year-old Khan's three wives.

The daughter of business tycoon Sir James Goldsmith and Lady Annabel Vane Tempest Stewart, Jemima Goldsmith studied English at Bristol University but quit before she could graduate in order to marry Khan.

She is said to have some Jewish heritage, leading to some Pakistanis accusing Khan of being controlled by a Zionist conspiracy, which he laughed off, according to The New York Times.

Goldsmith first met Khan at a nightclub in London when she was 21 and he was 42, reported British website The Week.

After they got married, Goldsmith converted to Islam and the couple set up home in Pakistan, so that Khan could pursue politics.

A budding entrepreneur, Goldsmith launched her own fashion label and developed her own brand of ketchup, according to The Week.

The couple had two sons, Sulaiman and Qasim, but in June 2004 it was announced that their marriage was over.

Congratulating Khan upon his electoral victory, Goldsmith, 44, praised his "tenacity, belief and refusal to accept defeat", saying: "22 years later, after humiliations, hurdles and sacrifices, my sons' father is Pakistan's next PM".

But she warned: "The challenge now is to remember why he entered politics in the first place."

Khan married former BBC weather girl Reham Ramzan in 2015, but the couple divorced less than a year later. She was also a presenter on the BBC regional news programme South Today.

Ramzan was born in Libya to Pakistani parents and has three children from a previous marriage.

According to her book, Khan is bisexual, takes hard drugs, and has fathered at least five children out of wedlock - some by Indian women, Daily Mail reported.

"He thinks he's God. I married him because I believed in him and his mission, but it's all fake," she wrote in her book.

Ramzan also claimed that Khan's first marriage broke down because Goldsmith found life difficult in Pakistan, especially when Khan's political career took off. But Goldsmith has furiously rebutted Ramzan's claims, and has threatened to sue her for libel.

On the eve of the Pakistan elections, Ramzan claimed that Khan is a "hypocrite who will do anything to get power" and would be a disaster for Pakistan, The Times of London reported.

Khan's current wife Bushra Maneka is said to be a spiritual healer whose face Khan said he had not seen until they were married in February this year.

"I did not catch a glimpse of my wife's face until after we were married. I proposed to her without seeing her because she had never met me without her face being covered with a full veil," Khan told the Daily Mail.

"The only idea I had of what she looked like came from an old photograph I had seen in her house," he added.

According to the British tabloid, Maneka, 39, is a leading scholar and spiritual guide in the mystic Sufi branch of Islam. 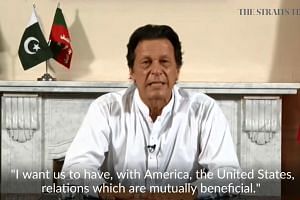 Stocks up as Imran Khan claims poll win in Pakistan

"She will not meet men other than her husband with her face uncovered, nor venture unveiled outside her house, which she rarely leaves," the report said.

When Maneka finally did remove her veil, Khan said: "I was not disappointed, and now I am happily married."

According to Daily Mail, Maneka is a mother of five and was still married to another man when she met Khan three years ago.

Khan admitted that in his younger playboy days, it would "have been unthinkable if someone had told me I would marry someone whose face I hadn't seen. I would have thought they were mad".

But his attitude to relationships has changed, he said.

"I have gradually realised that although I know more about physical attraction than anyone else, actually the character of a person and the mind, the intellect, is much more important than the physical, because in my experience that has the smallest shelf life."

"That is what keeps the interest. I have great respect for my wife's intellect and character."