In its editorial, the paper questions the thinking of Bhutanese people and the constraints that are being imposed with elections due to be held on October 18

THIMPHU (KUENSEL/ASIA NEWS NETWORK) - The stakes are high this election period - for the country, the political parties, and for the people.

It is one of those times when the Bhutanese cannot be trusted.

We become distrustful and suspicious of each other.

We vent on social media.

Politicians and parties, the media and the bureaucracy, the local government and the civil society organisations are bound by rules, too many perhaps and dos and don'ts.

People and organisations are not allowed to hold public gatherings, including marriages.

Visitors attending a fest in Thimphu are amused to read about a mushroom festival being cancelled in Bumthang. (The popular festival was cancelled as it was being held during the election campaign period).

Politicians are asking the rationale for keeping the campaign period from 6am to 6pm this time when it was 7am to 8pm five years ago.

Candidates are allowed to campaign only in their constituencies but party presidents have the permission to visit other dzongkhags (judicial districts).

It's a non-issue when the same campaign is done on social media. 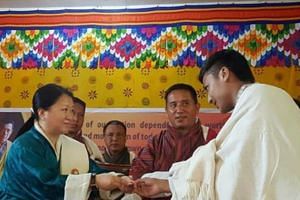 Bring women on board in Bhutan elections: Kuensel

In a society where the Dasho title (given to Bhutanese who have contributed significantly to improving the nation) is used generously, politicians are asked to drop their titles, designations and ranks, even though red scarves are awarded for life and the doctor titles earned.

We don't see the irony of going to the poll on a religious day while referring to the electoral rules to keep religion above politics.

We lament the rejection rates of postal ballots and how the literate still get it wrong but do not yet question the rationale of having envelop A and B and how the placement of the ballot into the wrong envelope results in rejection of the ballot, a right that we urge all voters to exercise.

Most of the times, our justifications hinge on the rhetoric of our unique process of democracy. But these rules and regulations appear to be framed to ease the work of the election commission and the army of officials it fields across the country.

It may not necessarily be to restrict the electoral process but this appears to be the public perception.

The people and political parties are aware that the commission has a mandate to conduct the elections and that it's right to implement the rules.

Its efforts to make this election as inclusive as possible are praiseworthy.

But restricting the people from holding annual community events while campaign meetings are clandestinely held in hotels and restaurants is not right.

It is time we question if it is because of the numerous dos and donts that people and parties indulge in alleged covert activities that each of them is accusing the other of.

The country is in the midst of electing its third government but we are as suspicious of the parties and the politicians that will go on to form the government.

The restrictions imposed tell us that the Bhutanese cannot be trusted.

There is a perception that political parties and politicians are liars.

We don't trust our people to attend festivals.

But we will trust one of these parties to govern the country for five years.

Kuensel is a member of The Straits Times media partner Asia News Network, an alliance of 23 news media entities.