JAKARTA (THE JAKARTA POST/ASIA NEWS NETWORK) - The head of Indonesia's Meteorology, Climatology and Geophysics Agency (BMKG) has a clear message on what to do when an earthquake strikes: Run to higher ground and not to wait for an official tsunami alert.

"Based on our calculations, there is a very narrow evacuation window period during an earthquake. We've even been able to predict that, in certain areas, a tsunami could possibly strike as soon as two minutes after the quake," she said in a statement made available to The Jakarta Post on Tuesday.

Ms Dwikorita called on the public to start evacuating on their own as soon as an earthquake hit the region, saying that waiting for an early tsunami warning from the BMKG or the local administration could prove to be disastrous. She added that it usually took five minutes for an early tsunami warning to be issued, whereas the available evacuation window period was less than that.

"For people living on the coast, if you feel a strong quake immediately run to higher ground such as hills or even sturdy buildings. Waiting for an early tsunami warning is very risky," Ms Dwikorita said.

The BMKG has been under scrutiny after it revoked a tsunami warning in Central Sulawesi following a 7.4-magnitude earthquake last year. After it was revoked on social media on Sept 28, an actual tsunami swept Palu's coastline. The disasters killed more than 2,100 people while about 5,000 were reported missing. Later, the BMKG explained that it had revoked the warning after the tsunami had receded in Palu.

To bolster disaster mitigation across the archipelago, the BMKG has established SLGs in various disaster-prone regions, including Maluku. 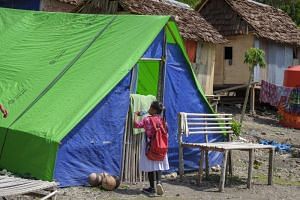 Ms Dwikorita urged the people of Maluku to have competent mitigation and evacuation skills to reduce losses and damages in the event of an earthquake and ensuing tsunami.

The SLG programme is expected to train the public in learning about and navigating evacuation routes during an earthquake and/or a tsunami in order to minimise casualties. The programme was attended by 70 participants, consisting of members of the regional disaster mitigation agency, academics, law enforcement officials, journalists and members of the public.

She added that the province had a long history of tsunamis.

Tsunamis of various intensity and origin have struck the provincial capital of Ambon over 50 times. The biggest recorded one in the region occurred in 1674, which killed 2,322 people in Ambon and Seram.

Ms Dwikorita said devastating tsunamis were not always preceded by strong earthquakes, urging people to evacuate immediately at the first sign of trouble.

"The tsunami that struck the Sunda Strait a few months ago was not triggered by a particularly strong tectonic quake. The tsunami in Palu also arrived much faster than was predicted," she added.

On Dec 22 last year, a large wave struck the west coast of Java in Banten province after the eruption of Anak Krakatau volcano. The eruption caused the volcano to collapse, greatly shrinking its size and triggering a tsunami.

At first, BMKG's Twitter account said at the time it was not a tsunami but a tidal wave. But later, the agency confirmed that it was a tsunami.

Its geophysics division deputy, Mr Muhammad Sadly, said in a statement that the SLG programme was also expected to bolster coordination between the regional disaster mitigation agency, the Indonesian Military (TNI) and the National Police to assist the public more effectively during an evacuation procedure.