He urged policymakers in the region to work more closely together in tackling the virus, according to The Star daily.

"As I speak, we are now being hit by the Zika virus. Singapore has been badly hit and the first Malaysian infected with Zika has been detected," Datuk Seri Najib said in a speech at the ninth General Assembly of the International Conference of Asian Political Parties in Kuala Lumpur.

"Close cooperation with our neighbours is absolutely vital to deal with the threat of communicable diseases like the Zika virus."

He said no country could afford to deal with the threat of the virus by working in isolation.

He added: "No country is an island. It's a cliche to say that but it's becoming increasingly true whether you talk about communicable diseases, terrorism or economic threats, while the plethora of challenges we face cannot be addressed effectively without the spirit of working together." 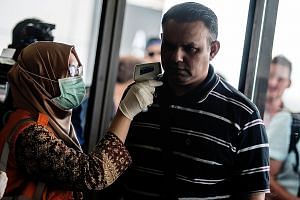 On Wednesday, a 58-year-old Klang woman was confirmed by the Health Ministry as the first case of Zika infection in Malaysia.

She was believed to have been infected when visiting her daughter in Singapore last month. She began displaying symptoms only a week after her return home.

Doctors at Sungai Buloh Hospital said she is recuperating well and is likely to be discharged in a few days.

Meanwhile, the Johor health department has said that vehicles travelling between Johor and Singapore will be sprayed with insect repellent.

"The vehicles we are referring to include lorries, public buses, school buses, private cars and trains," Johor's Health and Environment Committee chairman, Datuk Ayub Rahmat, was quoted as saying yesterday by the Bernama news agency.

It is not known when the new measure will kick in.

In Indonesia, Foreign Ministry spokesman Arrmanatha Nasir confirmed on Thursday that an Indonesian woman, a domestic helper, was currently receiving treatment for Zika at a hospital in Singapore.