MANILA (REUTERS) - The Philippines may lodge a protest with China against the reported presence of two military aircraft on a Chinese-built island in the South China Sea, the Philippines' top diplomat has said, amid concern that China is militarising the waterway.

The Philippine Daily Inquirer published pictures on Wednesday (April 18) that it said showed two military transport aircraft on the tarmac of Mischief Reef, which the Philippines claims.

The reef is the closest of the artificial islands that China has developed to the Philippines, and within its 200 nautical mile exclusive economic zone.

The newspaper said the photos were taken in January this year. Reuters could not verify the authenticity or date of the pictures.

Foreign Affairs Secretary Alan Peter Cayetano told reporters the defence and military establishments had been asked to confirm the presence of the aircraft, after which the Philippines could ask China to explain it.

"Filing a protest is one of the diplomatic actions being considered, pending a confirmation from the defence department," Cayetano said, adding that the Philippines has proposed claimants reverse defence enhancements in the Spratly Islands.

"Many claimants are putting embankments, radar and other defensive mechanisms, the challenge now is how to stop it and roll it back," he added.

China claims almost the entire South China Sea, a strategic waterway where about US$3 trillion worth of sea-borne goods pass every year. Brunei, Malaysia, the Philippines, Taiwan and Vietnam also have conflicting claims in the sea. 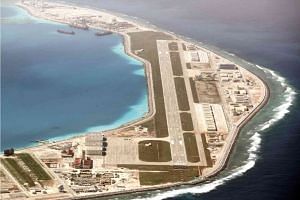 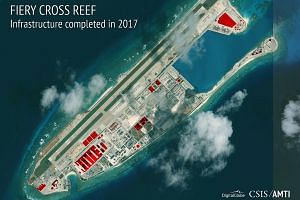 The Inquirer showed what it said were surveillance photos obtained from an unnamed source, showing what appeared to be two Xian Y-7 transport planes.

The military declined to comment and China's embassy in Manila did not respond immediately to a request for comment.

China's Defence Ministry also did not immediately respond to a request for comment.

Cayetano said claimants were talking to one another as well as "non-regional players" to resolve disputes and avoid a regional arms race.

China and South-east Asian countries started negotiations in Vietnam last month on a code of conduct in the South China Sea, starting with "less sensitive and less controversial" issues, he said.

Cayetano said they had identified common issues before discussing contentious provisions, such as whether the code would be legally binding and include sanctions against offenders.

He said there was no timeframe for conclusion and adoption of the code.

The drafting of the code has been met with widespread scepticism, with some experts convinced China's uncharacteristic support for it is aimed at placating South-east Asian states while buying time to complete its military installations in the sea.