Terms for an agreement between the Philippines and China may be finalised during Xi's visit, Cusi said in an interview in Singapore.

"We are discussing lifting the moratorium, and it is proposed that we do joint exploration with China," Cusi said on Tuesday (Oct 30).

"Those two are still being discussed and hopefully that will be resolved during the visit of President Xi Jinping. I would not wish to pre-empt things, but we are hopeful that we will come up with the terms of operations."

Any deal on joint exploration would mark a major win for China, which has stepped up efforts over the past decade to block South-east Asian nations from extracting energy resources in disputed seas. The Philippines had previously aligned with Vietnam in rejecting China's claims to most of the South China Sea as a basis for joint exploration.

President Benigno Aquino, who left office in 2016, had halted exploration work at Reed Bank in the South China Sea after filing an arbitration case disputing Beijing's claims to the resource-rich waters. An international court based in the Netherlands ruled in favour of Manila in July 2016, barely a month after Duterte took office. 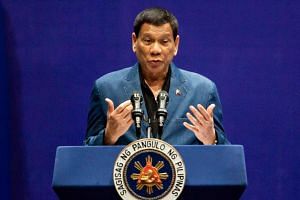 Since his election win, the 73-year-old Philippine leader has pivoted to China. He set aside the ruling and backed the idea of joint exploration, proposing a 60-40 sharing on the proceeds.

The US Energy Information Administrated has estimated that 4 trillion cubic ft of gas reserves worth billions of dollars could be found in areas claimed by the Philippines.

Even as Duterte and Xi's friendship has deepened, talks on a deal have dragged on for months. A meeting between top diplomats from the two countries on Monday failed to produce a breakthrough on the joint exploration plan.

PXP Energy chairman Manuel Pangilinan struck a bearish tone on Monday, telling reporters he didn't think the ban on disputed sea exploration would be lifted in time for Xi's visit in the third week of November. Talks with CNOOC can't be restarted until the Philippines and China clinch a bilateral agreement, he said.

"We have been talking with China to resolve that issue," Cusi said. "That is a high priority area for us because we know that there are a lot of reserves that we can explore and exploit."