MANILA (REUTERS) - The office of the Philippine president has sacked a deputy ombudsman for revealing information about an inquiry into alleged unexplained wealth of President Rodrigo Duterte, saying that his intent was to discredit him.

Arthur Carandang is liable for graft and betrayal of public trust for publicising evidence he had on the alleged undeclared wealth of Duterte and his family, according to a 10-page decision issued by executive secretary, Salvador Medialdea.

The investigation into Duterte by the Office of the Ombudsman, an independent agency, followed a complaint by a prominent senator that Duterte had amassed as much as 2.2 billion pesos (S$56.4 million) when he was a city mayor. Duterte denies that.

The investigation, which was terminated in November last year (2017), led to repeated angry outbursts by Duterte about the Ombudsman.

Carandang was sacked because of "guilty of manifest partiality" towards Senator Antonio Trillanes, a staunch critic of Duterte, with the intent to broadcast information "adverse to the president", according to Medialdea's decision.

Citing a report from the Anti-Money Laundering Council, Medialdea also said the figures Carandang presented were "false and misleading". 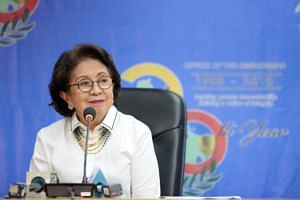 Carandang joins a growing list of people that include politicians, activists, a judge, a nun and two United Nations rapporteurs who have taken on Duterte and found themselves investigated, sacked, detained or humiliated, often after being lambasted in public by the president.

Duterte's office had previously ordered Carandang suspended for 90 days, but then Ombudsman Conchita Carpio-Morales refused to heed that, arguing the president had no jurisdiction.

Carandang's dismissal order was issued on Monday, just a few days after Morales retired and was replaced by a former judge appointed by Duterte.

Duterte's spokesman, Harry Roque, issued a statement confirming Carandang's dismissal and said that his case was given due consideration.