MELAKA (THE STAR/ASIA NEWS NETWORK) - Crows have become a menace here, driving residents to despair while leaving one local councillor trying to figure out why the birds are targeting women's undies.

Melaka Historic City (MBMB) councillor Tan Chin Gwan said he was perplexed by why crows were snatching undergarments placed on clotheslines, especially at the city's commercial hub of Kota Laksamana.

"These thieving birds are a menace as they have swooped down and snatched dozens of panties since June last year."

"I have received more than a hundred reports of crows terrorising condominiums and high-rise residential areas in Kota Laksamana in the last 10 months, and 20 per cent of the complaints have been on missing panties," he told The Star here on Thursday (April 11).

"I am still baffled by why these crows are snatching panties, and where they go to hide them," he said.

Mr Tan added that crows have been brazenly flying into hotel premises, eateries and schools to steal food, scaring people in the process.

He said the bird population has grown so much that the MBMB pest control unit has been forced to cull them. 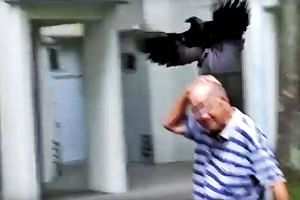 "In February, 81 birds were shot within the Kota Laksamana area and the operation will be continued till the end of this month," he said.

Mr Tan said that with their beaks and sharp claws, crows are also frightening away tourists, while hoteliers have complained of these creatures stealing food served at open-air restaurants.

"There have also been reports of hungry crows injuring hotel staff, as well as damaging rubbish bins at housing estates," he said.

Mr Tan added that schools in Bandar Hilir have been forced to place safety nets to stave off the avian siege.

"It's now 'normal' to hear of crows attacking pupils at canteens in a bid to grab their food," he lamented.

When it comes to counting crows, Mr Tan said the crow population in Melaka is estimated to be in the thousands, and they are now scattered across different areas within the city.