"Many investments are planned," he noted, citing established players like flour producer Prima Group, which entered Sri Lanka in 1977, as well as newer ones like infrastructure firms Hyflux and Sembcorp.

Even smaller firms like foodcourt chain Food Republic are coming to Sri Lanka, he said in an interview with Singapore media. "These are all positive results from the FTA."

The newly signed FTA was welcomed yesterday by companies and observers, who said it was a comprehensive, high-quality deal.

Mr Ivan Yeo, who runs a Colombo seafood restaurant, Cajun on Wheels, expects the deal to translate into lower costs when importing supplies and raw ingredients into Sri Lanka.

Sri Lanka would also benefit from Singapore investments, said DBS economist Irvin Seah, because there would be "procurement locally, hiring locally... and a transfer of technology and best practices".

The FTA comes at a time when trade with Sri Lanka is growing.

The FTA was signed after 18 months of negotiations. A 2004 attempt to reach an agreement failed.

Asked what had changed since 2004, Mr Lee said the current Sri Lankan government is on a path of economic liberalisation and wants more trade and investments.

It has been negotiating FTAs with a few partners, but Singapore was the first to sign one, he noted.

"Firstly, our trade with them is not so complicated. Secondly, they hope to set an example for their other trading partners," he said.

Mr Lee paid tribute to trade officials on both sides, but singled out the chief negotiator for Sri Lanka Saman Kelegama, who worked hard on the pact but died last year before it was sealed. "We owe something to him," said Mr Lee.

In the lead-up to the FTA signing, some Sri Lankan businesses and professional groups expressed opposition to the deal. To address the concerns, the government said it would look at new laws to counter sudden surges in imports and perceived unfair trade practices.

Asked if Sri Lanka may use these laws to go around some FTA terms in the future, Mr Lee said that any deal signed is considered a binding international agreement, and there are channels to settle disputes over differences in interpretation. 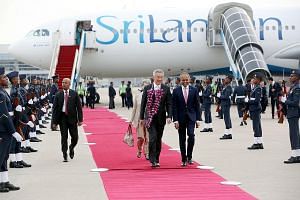 Singapore firms bullish about Sri Lanka amid news of FTA

On the protectionist backlash, he said there will always be pressures to preserve the status quo in any country. There will be winners and those adversely affected when a market is opened up to competition, he added. "The people who are adversely affected are... more concentrated and more effective at making some noise."

He said Singapore relied on the Sri Lankan government to persuade its population that the FTA is a good thing.

As for Singapore's broader strategy on trade deals, Mr Lee said: "We are not just trying to get as many deals as possible, otherwise we will collect up lots of little stamps."

The preference was for all countries to come together for a World Trade Organisation deal, he said, but this is difficult, given that "political winds are against it".

Hence, Singapore looks to do bilateral and regional FTAs.

Before pursuing a deal, Singapore asks if its businesses will benefit, how difficult it is to reach a deal and whether that deal is needed to ensure the country has "enough of a safety net" if the global free trade framework falls apart.

Bilateral and regional FTAs are more untidy, he noted, "but we have to live with this untidiness".