YANGON (AFP) - Two Reuters journalists in Myanmar were hooded and deprived of sleep after they were arrested while investigating a massacre of Rohingya Muslims, one of them told a court on Tuesday (July 17) in startling testimony.

Wa Lone, 32, and Kyaw Soe Oo, 28, face up to 14 years in jail if convicted under an official secrets law of possessing classified documents about security operations in Rakhine state.

A bloody army crackdown that started in August last year drove some 700,000 Rohingya from the western territory over the border into refugee camps in Bangladesh.

Refugees have recounted how hundreds of villages were torched as security forces engaged in widespread murder, rape and torture.

The reporters were investigating the September killing of 10 Rohingya men by soldiers when they were arrested in December in Yangon and driven to a secret location, Wa Lone told the court on the second day of their trial.

"The police took us to a place but they covered our heads with masks," he said, adding that he later realised it was a building notorious for torturing suspects.

"They asked us questions every two hours and we did not have a chance to sleep for three days," he continued.

Human Rights Watch has said that using prolonged sleep deprivation to obtain information from detainees is banned under international law. 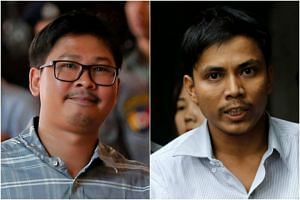 The police tried to persuade the pair not to publish their story about the massacre by offering to discuss their detention, Wa Lone said.

He added that interrogators even asked them why they, as Buddhists, were writing a story about the death of Muslims.

"They told us that we should not write it as the people who were killed were Kalar," Wa Lone said, referring to a pejorative term for Muslims and South Asians in Myanmar.

The reporters spent seven months behind bars during pre-trial hearings before the court ruled last week the trial would go ahead.

Reuters says its reporters were entrapped by policemen who lured them to dinner and handed them documents.

An officer told the court during pre-trial hearings that a superior had ordered his men to incriminate Wa Lone, who gave details about an apparently clumsy sting.

He said one of the policemen who stopped them outside the restaurant yelled out, "Here are secret documents - arrest them!" before the police had even looked at them closely.

"It is like they already knew," Wa Lone told the court.

Police could not be reached for comment about the allegations.

Rights groups and observers around the world have sharply condemned the case as an attempt to stifle press freedom.

The north of Rakhine state has been largely sealed off from independent journalists and observers.

The army insists its campaign was a legitimate response to Rohingya militant attacks that left about a dozen border guard police dead last August 25.

Civilian leader Aung San Suu Kyi's reputation, already tarnished by her failure to stand up for the Rohingya, has taken a further hit with the widely decried prosecution of the Reuters pair.