The Philippines will not concede any of its gains from an international tribunal's ruling on China's expansive claims to the South China Sea, even as it pursues ways to get Beijing to sit down and talk, the government's top lawyer Jose Calida said in Manila yesterday.

Foreign Minister Perfecto Yasay took the same message to the Asia-Europe Meeting (Asem) in Ulaanbaatar, Mongolia, calling on China to "exercise restraint and sobriety", so that talks on addressing disputes in the region can begin.

But he also said the Philippines "will pursue diplomatic means hopefully to convince China that we can coexist peacefully".

On Tuesday, the five-man Arbitral Tribunal at The Hague ruled that there was no legal basis for China to claim historic rights over the South China Sea. 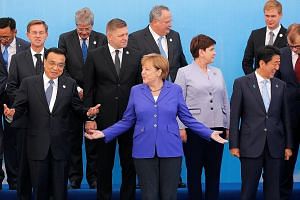 China claims more than two- thirds of these waters within a nine-dash line on its maps that overlaps with the Philippines' 200-nautical mile exclusive economic zone (EEZ), as well as those of Vietnam, Malaysia, Brunei and Taiwan.

Apart from invalidating that line, the tribunal also found that China's building of artificial islands on reefs that it occupies causes "irreparable harm" to the marine environment and that it has interfered with Filipino fishermen's traditional fishing rights in restricting their access to Scarborough Shoal.

As expected, China rejected that decision, and said it would not enter into any negotiations that will invoke that ruling.

But the Philippines remains hopeful of a dialogue with China.

"We will be patient, of course. Hopefully, China will also show the same grace that we have shown when we did not, as wanted by some sectors of society, gloat over this ruling," said Mr Calida. "It's a sober approach to having won this monumental case," he added.

He said the Philippines was already reaching out to China to stop harassment of Filipino fishermen venturing near the contested Scarborough Shoal.

Mr Yasay has been instructed "to do what he can do to have the other party listen to us", said Mr Calida.

He added that Mr Yasay is expected to meet representatives from China on the sidelines of Asem.

President Rodrigo Duterte on Thursday ended his unusual silence since the ruling, saying at a private function that he was considering sending former president Fidel Ramos to Beijing to discuss getting talks started.

"War is not an option," he said. "So, what is the other side? Peaceful talk."

But the government's cautious tone on the decision has invited criticism from some quarters of the public, although most Filipinos were in a celebratory mood.

One Filipino on Twitter called Mr Yasay "a party-pooper" after the minister appeared on live television shortly after the ruling was announced, saying sombrely that the government welcomed the judgment and would study how best to respond.

A version of this article appeared in the print edition of The Straits Times on July 16, 2016, with the headline 'Manila will not concede but is willing to talk with Beijing'. Subscribe
Topics:
More
Whatsapp Linkedin FB Messenger Telegram Reddit WeChat Pinterest Print Purchase Article Copy permalink