KUALA LUMPUR (THE STAR/ASIA NEWS NETWORK) - The father of five-year-old Noor Amila Edrus Norsham has forgiven the family member believed to have abducted and murdered his son.

Mr Norsham Jalil, 63, said he felt that to be a good Muslim, he should forgive the suspect.

"Let the law deal with him. I cannot speak about what happened, maybe he was under a demon's influence," he told reporters outside his house at Perumahan Awam Jinjang Utara on Friday (Aug 19).

It was believed that his body was mutilated before he was dumped into a ravine at Kampung Kemensah, Hulu Kelang.

A source close to the investigation said the body was discovered when the suspect led police to the ravine at about 2pm on Thursday. 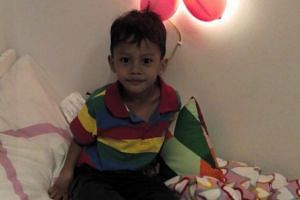 Noor Amila was last seen near a mosque at the Jinjang Utara longhouse, close to his home, at about 7.20pm on Aug 11.

On Aug 15, the family member was arrested to facilitate investigations.

Police re-classified the case from a missing person's report to kidnapping following the man's arrest.

"He was quiet and mysterious. We noticed that he disliked Noor Amila as he would constantly scold him for making noise but we never expected him to do such a thing," she said.

Mr Norsham said the man even joined them when they were frantically looking for the missing boy.

Women, Family and Community Development Minister Datuk Seri Rohani Abdul Karim, who visited the family at their home on Friday, said her ministry has offered the family counselling following the traumatic experience.

"We understand that this is a trying time for them.

"But when they are ready, they should reach out and talk to our counsellors," she said, advising the family not to hide their grief.