KUALA LUMPUR (REUTERS) - Malaysia's prime minister told his deputy and other officials on Monday to stop commenting on a graft scandal at the country's state investment fund, saying arguments among leaders would erode support for the government.

The fund, 1MDB, has debts of more than US$11 billion (S$15 billion), and is being investigated by authorities for financial mismanagement and graft. The state-owned firm's advisory board is chaired by Prime Minister Najib Razak.

"All administrative officials including the deputy prime minister, Muhyiddin Yassin, should wait for the results of the investigation," Najib's office said in a statement.

"Rationally, we should avoid making statements that can roil people's perceptions toward the country's leadership, government and Umno," the office said, referring to the ruling party which Najib heads. 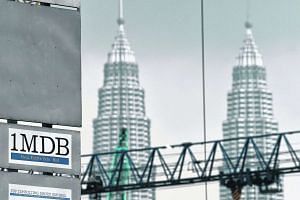 Late on Sunday, Muhyiddin suggested that Najib should personally explain issues around 1MDB to the public, the Star newspaper reported. "I want to give you a stern warning that if nothing is done now to manage these issues, Barisan will lose," Muhyiddin said at an event, according to The Star.

Barisan Nasional, or National Front, is the ruling coalition, of which Umno is the main component.

Umno, which represents the majority ethnic Malay community, has led Malaysia's coalition governments since independence in 1957 and Najib's office also warned of the political damage the divisive scandal could cause. "People's support towards the government and the party will erode if we argue among ourselves," Najib's office said.