Mr Jack Ma, co-founder of the Chinese tech giant Alibaba, who is retiring as its executive chairman next year, has set his eyes on the largest Internet economy in South-east Asia: Indonesia.

Mr Ma told reporters yesterday that he wanted to set up a Jack Ma Institute to train Indonesians on e-commerce and the Internet. He did not say when it would be launched.

"I'm very happy to say that I'm not coming here as the chairman and CEO of Alibaba Group," he said on the sidelines of the International Monetary Fund-World Bank annual meetings in Bali.

"I am coming as an adviser," added Mr Ma, who is an adviser to the Indonesian government on developing the country's e-commerce sector.

Indonesia's digital economy is projected to hit US$130 billion (S$179.1 billion) by 2020, contributing 11 per cent to its gross domestic product, according to an estimate from the Communications and Information Ministry.

While acknowledging that nothing concrete has been tabled, Mr Ma spoke of training 1,000 tech leaders in Indonesia each year for 10 years.

He said he would also invite local entrepreneurs to attend training but did not elaborate. 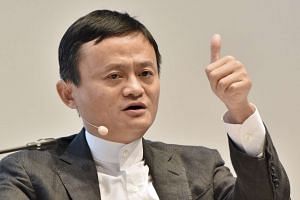 So what if Indonesia has Jack Ma as its e-commerce adviser? The Jakarta Post columnist

"This time I am specifically very moved and inspired by the ministers that they focus on talent, because without that, it's always talk," Mr Ma said.

"We think the future of Indonesia depends on education and training. We should look at how we can make young people to not miss the great challenge and opportunity of this digital period," Mr Ma said.

Indonesia is a key market for Alibaba, whose cloud computing arm Alibaba Cloud launched a data centre in the country in March.

The company would continue to invest "not only on e-commerce, but also cloud computing, logistics and...infrastructure" in Indonesia, he said, while also helping local businesses to grow.

Mr Ma co-founded Alibaba in 1999 with 17 others, several of whom were his students. Now considered among the world's pre-eminent tech companies with 66,000 employees, Alibaba has turned the former educator into one of the world's richest individuals. Forbes has put his net worth at US$36.6 billion.

A father of three children, Mr Ma stepped down as the company's CEO in 2013 and began to pay more attention to philanthropy, among other endeavours. In 2014, he set up a charitable trust in China to tackle health and environment issues. He also funnelled funds to support an education project in rural China last year.

Last month, Mr Ma disclosed his plan to step down as Alibaba's executive chairman when he turns 55 next year. In doing so, he is set to follow in the footsteps of Microsoft founder Bill Gates.