If, as expected, the nomination is endorsed by the National Assembly later this month, Trong will become the first Vietnamese leader to hold two political positions since founding father Ho Chi Minh.

Collective leadership was established by the party after the death of "Uncle" Ho in 1969 amid the turmoil of war with the United States.

The Americans believed victory would be theirs after the death of Ho, who led the revolution in the north and then the war with the south.

No leader dared to step into Ho's shoes, so collective leadership was adopted for both party and state.

It carried the spirit of revolution forward, bringing victory over the US and South Vietnamese forces in 1975 and a reunified Vietnam under communist rule.

The US had fatally underestimated Vietnam and the solidarity of its leadership.

Collective leadership meant decision-making within party and government did not rest with one individual. 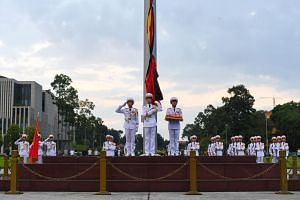 Leaders of different factions would balance each other out, avoiding the pitfall of dictatorship.

Current party chief Trong, a theorist, made this clear in his book "Renewal Vietnam", published in 2011 when he took office for his first term.

"The party's committee and its heads should report their work to collectives that elected them and be accountable to them," Trong wrote.

Vietnam's collective leadership has been tested repeatedly and proven to be a workable approach in the decades since the death of Ho.

It has succeeded in steering the Doi Moi economic reforms that have brought impressive progress since 1986.

No single leader can claim credit for Doi Moi and while they might have different ideas about its details, the core spirit of the reform is solid and agreed by all.

Influence in the national leadership has swung between conservative hardliners and more liberal reformers, but the principle of collective leadership means the overall reform direction has remained steady.

While the presidential role is considered more ceremonial, it plays a significant part in balancing power by mediating to reconcile differences between the party chief and the premier.

But with the new power arrangement, the Vietnamese communist system shifts much closer in nature to the autocratic Chinese system.

Trong himself might favour the Chinese style of rule, but the warning for Vietnam comes in the form of Mao Zedong's charismatic and disastrous leadership, when loyalist factions took Mao's name to wage war against their opponents.

Party chief Trong might be an intelligent, mature and experienced leader, but Vietnam these days needs openness and a balance of power within the system, rather than centralising of power under charismatic leadership.