JAKARTA (THE JAKARTA POST/ASIA NEWS NETWORK) - Mr Asmono, a resident of the Indonesian city of Yogyakarta, could not fathom what exactly had happened to his wife's grave.

Last Wednesday (April 3), he went to the grave, located in a cemetery next to the Bethesda Hospital in Sleman regency, only to find that the cross that marked the final resting place of his wife Sri Wiyanti had mysteriously disappeared.

He later found the marker among at least six other crosses that had been pulled out from their graves. After finding the marker, the 59-year-old returned the cross to his wife's grave.

On Sunday, he went back to the grave and found that the marker was missing again. "I can't find the (cross) anymore," Mr Asmono, who like many Indonesians go by one name, told The Jakarta Post. "There is no way a madman could have done this."

At least 11 wooden crosses at the Bethesda Hospital cemetery were found either missing, damaged or partially burned on Sunday. The wooden markers are usually used for the first 1,000 days after the funeral of the deceased.

After that, the wooden grave marker is usually replaced by a more permanent gravestone made from stone or concrete.

It is not clear who removed and vandalised the crosses.

Mr Suwarto Hadi, chairman of the Tresna Sejati community that manages the graveyard, said he did not know anything about the vandalised grave markers.

One of the graveyard's caretakers, Mr Hari, also did not respond to The Jakarta Post's request for comment.

Sleman Regent Sri Purnomo speculated that the perpetrator could be one of the homeless people living around the graveyard, who may have taken the wooden grave markers and burned them to stay warm at night. 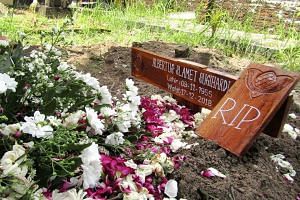 Uproar over 'altered' cross puts focus on intolerance in Indonesia

But the affected families doubted the theory. Mr Trianto - whose father-in-law's grave marker also went missing - said homeless people had lived near the graveyard for a long time but such incidents had never occurred. "There might be someone who did this intentionally," he said, adding that the perpetrators' motive might be to provoke Christians living in and around Yogyakarta.

Sleman Police chief Rizky Ferdiansyah dismissed the conjecture, saying that the investigation into the incident was ongoing.

While the motive remains unclear, the incident has added to a long list of instances of intolerance in Yogyakarta, a de facto Islamic sultanate once known as a beacon of tolerance.

In December, residents of Purbayan in Yogyakarta cut off the top of a cross on the grave of Mr Albertus Slamet Sugihardi shortly after his death at the age of 63. Locals said Mr Slamet could not be buried in a local cemetery and that was the community's consensus.

A few weeks later, at least 19 crosses were wrecked in three cemeteries in Magelang, Central Java, along with the graves of three Muslims.

Some of the wooden crosses were damaged and partially pulled out of the ground, while some marble gravestones were smashed to pieces.

Days after the incident in Magelang, the police arrested a former psychiatric hospital patient after he was allegedly seen destroying a grave cross and holding an iron hammer.

The incident in Sleman occurred several days after Yogyakarta Governor Hamengkubuwono issued a gubernatorial instruction on the prevention of social conflict. Through the instruction, the government requires all regional heads to evaluate every unofficial rule that could become a basis for discriminative regulations or actions.

The instruction was issued in the wake of an incident that went viral on social media last week, when residents of Karet village in Pleret subdistrict, Bantul regency, reportedly refused to rent a house in the village to a Christian family.

The refusal was made because of a village regulation enacted in 2015 that banned non-Muslims from residing or owning land in the village. Local officials later revoked the Muslim-only regulation after holding meetings with the Yogyakarta Home Affairs Agency.