The students who staged the noisy demonstration on Monday were from a school in the Indonesian city of Surabaya.

"Say no to Valentine!" chanted the students, who were aged between 13 and 15 and included many girls wearing headscarves.

It was the latest expression of anger at Valentine's Day in the world's most populous Muslim-majority country, where Islamic clerics and some pious Muslims typically use the occasion to target what they see as Western decadence.

"This protest was organised as we have seen on television that Valentine's Day tends to be associated with free sex," said Pandu Satria, organiser of the demonstration that was attended by scores of students. "That makes us afraid." 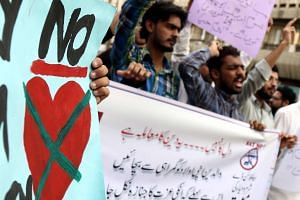 Ida Indahwati Waliulu, headmaster of the school which is run by an Islamic organisation, added: "There is a certain pride about this positive action carried out by the students."

As well as the demonstration, several cities across the country banned people from celebrating the occasion.

In 2015 the country's top Islamic clerical body threatened to issue a fatwa against the sale of condoms following reports they were being sold together with chocolate to mark Valentine's Day.

Despite the objections from some, many Indonesians celebrate the occasion, particularly in major cities where cards and chocolates to mark it are widely available.