JAKARTA (AFP) - Indonesia hopes next week to secure an agreement with Malaysia and the Philippines on conducting joint military patrols on the high seas, where Islamic militants have been on a kidnapping spree, an official said on Thursday (April 28).

The plight of hostages held by the Abu Sayyaf militant group could also be on the agenda when the foreign ministers and military commanders of the three neighbours meet next Thursday in Jakarta for talks.

Abu Sayyaf sparked global outrage this week when the severed head of a Canadian hostage was found dumped in the southern Philippines. 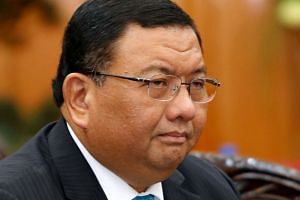 The militants, whose leaders have pledged allegiance to the Islamic State in Iraq and Syria (ISIS), are holding more than 20 other foreigners captive, including fourteen Indonesian sailors snatched from waters where Abu Sayyaf are known to operate.

"What we have started discussing is how we can conduct coordinated patrols in the region so we can prevent problems like piracy," Foreign Ministry spokesman Arrmanatha Nasir told reporters.

"We hope this meeting will be realised with a concrete action, like joint patrols."

Mr Nasir also said it was vital marine trade was not disrupted by these militants, and Indonesia hoped the talks would produce a joint statement committing the three countries to maintaining regional security.

Ten Indonesian sailors were abducted last month by a group believed to be a faction of Abu Sayyaf and taken to Sulu, a remote southern island that is a hideout of the militant outfit. Just weeks later another four were snatched by gunmen aboard boats.

Indonesia has been checking with the Philippines on the condition of its sailors ever since they were abducted, Mr Nasir said.

The Philippines has already vowed to launch a military assault aimed at "neutralising" Abu Sayyaf, which is believed to be holding a Dutch birdwatcher kidnapped from a southern Philippine island in 2012, as well as 18 Indonesian and Malaysian sailors abducted over the past month.

Many Western and other embassies routinely issue warnings against travelling to most of the Philippines' Muslim-populated southern regions, which lie just northeast of Sabah, because of the risk of being abducted by the group.