Cash-strapped Malaysian players are instead driving plans, hoping to get leg-up in expansion efforts

In this second and final part of China's growing involvement in the Malaysian economy, The Straits Times looks at the major port proposals that were supposed to involve companies from China, and what is happening to them. The first part published yesterday discussed the incoming China projects and their effect on Malaysian players.

Beijing's apparent support for new Malaysian ports has sparked Kuala Lumpur's optimism that it can supplant Singapore as South-east Asia's shipping hub of choice. But the main proponents of these ports are not the huge Chinese companies being talked about.

Instead, they are actually cash- strapped Malaysian players hoping to secure a leg-up in efforts to expand quickly. And while Beijing is supportive of Malaysia's plan, The Straits Times understands that China's state-linked firms earmarked as partners have doubts about the viability of pouring billions into an already over-supplied sector.

"Port Klang is already expanding despite not running at full capacity. It makes no sense to pursue both the Melaka Gateway and Carey Island Port so close to each other in the Malacca Strait," said former Port Klang Authority (PKA) chief Lee Hwa Beng.

At least three new port projects, said to involve China and worth some RM155 billion (S$50 billion), were in the offing as of early this year. 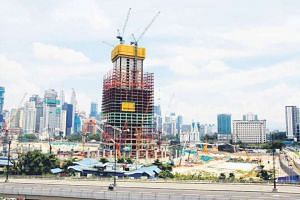 Chinese deals in Malaysia under scrutiny 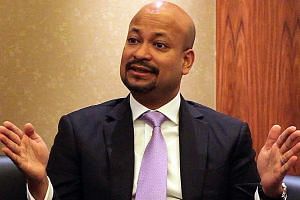 Speed and scale of Chinese contractors ignite fear in Malaysia

But the massive Carey Island project beside the main Port Klang in Selangor, valued at RM100 billion and which was supposed to bring in a Chinese partner, instead acquired an Indian partner during Prime Minister Najib Razak's visit to India last month.

Industry and financial sources with knowledge of the plan told The Straits Times that MMC Corp, the Malaysian conglomerate proposing the deal ahead of plans for a public listing of its ports business, found China Merchants Group's (CMG) terms too demanding.

"MMC can't afford to finance the project on its own. But CMG doesn't just want to be a bankroller," a source said of the port on an island next to the established Port Klang.

Industry players and government officials are also doubtful that the RM43 billion Melaka Gateway, spearheaded by the little-known KAJ Developments, will take off, due to uncertainty among its Chinese partners, chief of which is PowerChina International.

The Chinese firms are still evaluating the potential returns from having to build the harbour on one natural island and three reclaimed ones. "In three years, they've invited ministers including the premier to several launches and signings, but are still short of a legally binding agreement," a government source told The Straits Times.

It is only on Malaysia's east coast town of Kuantan in Pahang that there is a Malaysian port project which has long started work with the help of a Chinese company. The Kuantan port is being expanded at a cost of RM4 billion with the involvement of China's Beibu Gulf Port Group.

For China, not only does most of its trade pass through the Malacca Strait, but also up to 80 per cent of its imports of oil and gas needed to power up its economy. This prompted then Chinese President Hu Jintao to make the "Malacca Dilemma" a key strategic issue as far back as 2003.

But Malaysia is not China's only solution to securing a trade route from Europe and the Indian Ocean. Beijing has also embarked on port-and- rail, and oil-and-gas pipe links in Myanmar, Nepal, Bangladesh and Eastern Europe. Last November, Chinese cargo was successfully carried overland to Pakistan's Gwadar Port to be shipped out.

"Yes, China is friendly to Malaysia now and wants stronger allies in Asean. But it also has other strategic interests, and we cannot assume Malaysian ports are its top priority," said former PKA boss Datuk Lee.

"The Chinese government itself may now be concerned about its global image and, most importantly, about capital flight," said Dr Johan Saravanamuttu of the S. Rajaratnam School of International Studies.