KOTA KINABALU (THE STAR/ASIA NEWS NETWORK) - The resurrection of a kidnap-for-ransom group in the southern Philippines after a 21-month hiatus is posing fresh threats to Sabah's east coast.

Abu Sayyaf sub-commanders are regrouping after nearly two years on the run.

One "resurrected" sub-commander is Indang Susukan, who was widely reported to have died when his wife and children were killed during a security forces' attack on his home base in Talipao, on Jolo island.

He previously held several hostages who were abducted from the east coast of Sabah, including the Tung cousins from Negri Sembilan kidnapped in 2012, Taiwanese Chang An Wei (snatched from Pom Pom island in 2013) and Bernard Then, the first and only Malaysian to be beheaded by Abu Sayyaf.

Indang is back on the radar of Philippine security forces as he is believed to be plotting a cross-border kidnapping.

The sub-commander has recovered from gunshot injuries during the security forces' attack and kept a low profile. He has changed his looks by dyeing his long black hair blonde.

He, however, continues to organise localised kidnappings in Jolo town with the Lucky 9 group. 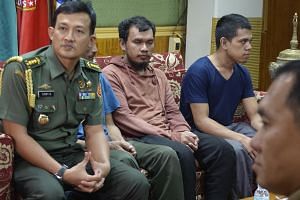 Indang, according to a regional intelligence source, is working with another Abu Sayyaf sub-commander, Hatib Sawadjan, who managed to stay out of sight during the crackdown on the Abu Sayyaf.

The BOL creates a Muslim-majority sub-state in the Philippines that will replace the Autonomous Region of Muslim Mindanao.

The source explained that the warlords were setting their sights on "high value" victims.

According to the source, the warlords - through Abu Sayyaf sub-commanders - have so far financed up to 1.7 million pesos (S$122,868.48) for two kidnap-for-ransom groups to carry out kidnappings in waters off the east coast of Sabah.

The source said one of the groups, with at least eight gunmen led by Amah Ullah, aka Suraka, tried to target an oil palm-laden tugboat in Tambisan waters off Lahad Datu on Aug 10. But the group failed after Malaysian forces sped to the scene when they were alerted by the crew, who hid in the tugboat.

The source said Suraka was backed by another group of seven under Salip Murah, who was waiting at the sea border.

After the failed attempt, Philippine authorities tracked down Suraka to the Tawi-Tawi chain of islands in the southern Philippines and killed him a few days later, while several members of his eight-man gang were caught, the source added.

Subsequently, Salip and his group fled towards the Philippines' Palawan island (north of Kudat), where they picked up two Filipino hostages and returned to Jolo.

On Sept 11, a group led by an Abu Sayyaf gunman named Titing used pump boats to sneak from Siluag island in the southern Philippines into Sabah waters by navigating through shallow shoals.

Pump boats, often likened to sea scooters, are powered by water pumps and used as a cheaper mode of transport to move around shallow waters without any hassle, rather than using outboard engines.

The source said for kidnap-for-ransom groups, travelling on a pump boat was much cheaper as it cost them about RM200 in fuel for a round trip from Jolo to Semporna. With speedboat engines, the fuel could cost over RM1,000.

"These pump boats are very agile, they can move through shallow waters and also seaweed farms without getting stuck like those with outboard engines," he said.

In the latest case, the abductors snatched two Indonesian fishermen at gunpoint from a trawler anchored near Pulau Gaya, which is about a 30- to 40-minute boat ride from Semporna town.

Mr Samsul Sagunim, 40, and Mr Usman Yunus, 35, were taken on a pump boat to Jolo, where they are said to be held by Indang in Patikul.

"The kidnappers thought that the hostages were Malaysians as the fishing trawler flew the Malaysian flag," said the source, adding that a Malaysian hostage could be worth a ransom of about RM1 million (S$329,893.87), whereas it was only about RM50,000 for an Indonesian boatman.

Sabah Police Commissioner Datuk Omar Mammah told reporters on Tuesday that the captors were demanding RM4 million for the release of the fishermen.

"That's not surprising, because usually the initial ransom demand is outrageous as it is part of such groups' bargaining process," said the source.

Before this, the last abduction in Sabah waters was on Dec 8, 2016, when the notorious Abraham @ Ibrahim went on a kidnapping spree.

In his third bid that night, Abraham and two accomplices were killed by police in a gunfight off Pulau Gaya, in Semporna.

Police rescued a victim, but two other kidnappers and a second victim are still missing at sea.

According to the source, the second kidnap-for-ransom group, led by one self-styled "Commander Black", is lurking in the waters between eastern Sabah and the Tawi-Tawi chain of islands.

"Commander Black is an emerging kidnapper. He is aggressive and he will take on security forces if confronted," he said.

The source said they were using "spotters" to give them information on potential targets.

"The Sept 11 kidnapping was a test run. It was successful and the kidnap-for-ransom group will use the same route - going through shallow waters - to go for a more audacious attempt along the shores of Semporna town," he said.

However, Commander Black's plan might have hit a snag.

Last Thursday night, in the waters off Kunak, Eastern Sabah Security Command (Esscom) shot dead two suspected kidnap-for-ransom group "collaborators" and recovered two revolvers, a samurai sword and a pump boat which were suspected to be used in the kidnapping of the two Indonesians.

Esscom commander Deputy Comm Datuk Hazani Ghazali said they believed the two killed were key local links to the groups involved in the Sept 11 snatching of the two Indonesians off Pulau Gaya.

"I believe we have cut off their links, hopefully they will not have spotters to guide them into our waters," he said when contacted.