KUALA LUMPUR • Former Malaysian prime minister Mahathir Mohamad has sarcastically suggested that a movie be produced on all the drama surrounding state investment fund 1Malaysia Development Berhad (1MDB), adding that the scandal has made the country famous and will bring in tourists.

"A movie can be made on 1MDB, the figures involved and various locations around the world (where 1MDB-linked funds allegedly flowed to)," he wrote on his blog yesterday. "Malaysia has never seen a scandal on the scale of 1MDB. The people, who find it difficult to imagine the scale of RM1 million (S$345,000), are attempting to imagine how much is RM1 billion, RM42 billion. The rakyat is confused with stories of so much money going all over the world," he wrote in chedet.cc, a platform he has consistently used to attack the administration of Prime Minister Najib Razak.

Tun Dr Mahathir cited traces of money allegedly found in places like Hong Kong, Switzerland, London, the British Virgin Islands and Abu Dhabi, with the authorities in several countries, including Singapore, investigating the alleged movements of the funds. 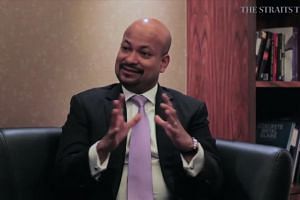 "That is the story of 1MDB, which has made Malaysia known all around the world. Now, there will be more tourists coming to the 1MDB country," he said.

A version of this article appeared in the print edition of The Straits Times on April 28, 2016, with the headline 'A movie can be made on 1MDB saga: Mahathir'. Subscribe
Topics:
More
Whatsapp Linkedin FB Messenger Telegram Reddit WeChat Pinterest Print Purchase Article Copy permalink