Poor drainage that could not cope with intense rainfall has been cited as the main cause of the disastrous floods that hit Penang state on Sunday morning.

The problem was compounded by the high amount of garbage from domestic industry and agriculture that is thrown into the state's rivers and monsoon drains, reported the New Straits Times.

Environmental activists have also blamed rapid development, and unscrupulous cutting of hill slopes for the frequent flash floods in the state.

"This was an extraordinary rainfall, coupled with the high tide of 2.7m beginning at 1pm. Given these conditions, I admit that our drainage systems were unable to contain the water," Mr Chow Chow Kon Yeow, chairman of the state's local government, traffic management and flood mitigation committee, said on Sunday.

Penang received 372mm of rainfall after an 18-hour storm, the equivalent of 1.5 months of rain.

According to Dr Fredolin Tangang, climate expert at Universiti Kebangsaan Malaysia, the deluge was caused by a low pressure system which had passed over the state from Saturday.

"This phenomenon is called the Borneo vortex, and it brings heavy rain and winds. It also marks the start of the monsoon season," he told The Star.

He added that Penang was unlikely to face another severe storm like Saturday's, though he would need to confirm this with updated data from the Malaysian Meteorological Department (MetMalaysia). 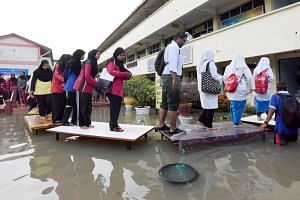 The worst might be over, but flood-stricken residents will still have to endure heavy rain and thunderstorms for at least the coming week, the department forecast on its website.

Yesterday afternoon, MetMalaysia issued a red status alert for Penang and three other states in the north - Kedah, Perlis and Perak.

A version of this article appeared in the print edition of The Straits Times on November 07, 2017, with the headline 'Poor drainage cited as main cause of floods'. Subscribe
Topics:
More
Whatsapp Linkedin FB Messenger Telegram Reddit WeChat Pinterest Print Purchase Article Copy permalink