Hong Kong is investing heavily to be Asia's leading fintech hub, and has positioned itself as the conduit between China's tech giants and the rest of the world.

The territory sees its strong laws and financial regulations as an advantage, even as mainland cities like Shenzhen are vying hard to attract the same investments, according to its investment promotion agency InvestHK.

Among the preferential policies Hong Kong has put in place this year is a HK$500 million (S$87 million) fund to develop financial services over the next half-decade, including in fintech, which combines finance with technologies such as blockchain and cryptocurrencies.

Mr Charles d'Haussy, who heads the fintech division of InvestHK, said at a forum on Monday that the growth of the Guangdong-Hong Kong-Macau bay area also provides an "excellent use case" for cross-border financing that will power China's Belt and Road projects, another area where Hong Kong is competing keenly with Singapore.

"Between Hong Kong, the mainland with Shenzhen and Guangdong cities, as well as Macau, you end up with three different jurisdictions," he said.

"It's a valuable exercise for all of us (on) how to move things forward in the Belt and Road Initiative."

Entrepreneurs from both sides of the border also spoke about the benefits of deeper fintech cooperation.

Hong Kong entrepreneur Tim Lee said when he moved to China a decade ago, the prevailing mantra was to copy US technologies. 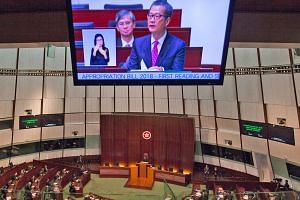 Hong Kong may be hit by perfect storm

"But in this era of mobile payments, the front runner is China... and we have arrived at 'copy from China'," he said.

Today, it handles HK$600 million worth of transactions in a month.

These include Alibaba spin-off Ant Financial Services Group, which in June raised US$14 billion.

For the Chinese firms, Hong Kong is a "polishing place", said Mr Lee. "Hong Kong's regulatory, language and product requirements help you polish your products and get them ready for overseas markets," he added.

Serial entrepreneur Sun Jiangtao agreed. "When I list in Hong Kong, I don't have to pass a single penny under the table and just have to follow the public regulations," he said. "The advantage of the rule of law is very obvious to me."

Although figures from consulting firm Accenture showed investments in Hong Kong-based fintech firms fell sharply in the first half of this year even as they continue to grow in China, Mr d'Haussy said more Chinese firms are recognising Hong Kong's value proposition.

"When you speak to the CEOs, CFOs, chairs and members of the board of the big companies... they want to have clarity about regulations in finance," he said. "That's what Hong Kong is offering."