TAIPEI (AFP) - Taiwan's loss of another diplomatic ally to China is the latest strike in a multi-pronged effort to isolate the island, undermine its claims to sovereignty, and render it invisible on the global stage.

As Taiwan's President Tsai Ing-wen refuses to bend to Beijing's demand that she recognise the island as part of "one China", the Chinese government has stepped up its campaign to shrink its status.

Major international businesses including airlines and hotels have recently caved to pressure to list Taiwan as part of China on their websites.

Taiwan has also been shut out of numerous high-profile global forums at Beijing's request and China has stepped up military drills around the self-ruled island.

El Salvador's President Sanchez Ceren said its decision on Tuesday (Aug 21) to switch ties from Taipei to Beijing was part of the "inevitable trends of our day", while Taiwan accused China of using dollar diplomacy to lure away its supporters.

Taiwan, whose official name is Republic of China (ROC), now has only 17 official diplomatic allies, the vast majority of them small economies in the Pacific, Caribbean and Central America.

Five have jumped ship since Ms Tsai took power in 2016, with three this year alone. 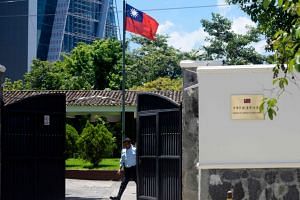 The allies may not pack much punch internationally, but chipping away at them has deep significance for Taiwan as it strives to hold on to any formal recognition of its legitimacy.

Taiwan sees itself as a sovereign country and has its own democratic political system, laws and currency.

However, Beijing considers it a stray province to be brought back into the fold, by force if necessary, with President Xi Jinping repeatedly underscoring the importance of territorial integrity to China's resurgence.

"If the ROC is completely unrecognised, I believe Beijing's calculation is that it will be easier to delegitimise the government in Taipei and prime demoralised Taiwanese and international society for unification," said Mr Jonathan Sullivan, director of China Programmes at the University of Nottingham.

The US is Taiwan's most important informal ally and major arms supplier, despite having switched official diplomatic ties to Beijing in 1979.

Beijing protested last week when Ms Tsai spoke publicly in Los Angeles - the first Taiwan president to do so for 15 years - and has also complained about recent friendly overtures from the Trump administration, including a fresh commitment to support Taiwan militarily.

"It's an indirect slap in Trump's face, as El Salvador is in the US backyard," said Mr Fan.

China's nationalist troops retreated to Taiwan after losing a war on the mainland to communist forces in 1949, and declared the island the seat of power of the defeated Republic of China.

For decades, Taipei was recognised as China's official representative, but in 1971, the United Nations switched recognition to Beijing.

That left Taiwan with no sovereign status internationally and prompted major powers to change diplomatic allegiance.

Taiwan has never declared independence from the mainland and is hamstrung by its own Constitution, which still defines it as the Republic of China, not as a separate entity.

Beijing has said it would take military action if Taiwan ever formally split. The US would also be unlikely to support such a provocative move.

President Tsai declared on Tuesday that Taiwan would not bow to pressure and slammed China's "increasingly out-of-control international behaviour".

But China's growing global clout makes it a David and Goliath fight for recognition.

Mr Xi is confident he can use both hard and soft power to pave the way for reunification, said Dr Huang Kwei-bo, vice-dean at Taiwan's National Chengchi University's international affairs college.

"They now ignore stakeholders in Taiwan and unilaterally decide to do whatever they want. This is quite worrying, as it means Beijing doesn't have any willingness to communicate anymore," said Dr Huang.

Beijing cut off all official contact with Taipei after Ms Tsai came to power, as her party is traditionally independence-leaning.

However, Mr Sullivan noted that if Taiwan loses all recognition from its allies, Beijing may unwittingly fuel calls from independence supporters to push for the island to redefine itself as the Republic of Taiwan.

"Taiwan's informal relationships, as a major trading economy, with the US, Japan the European Union and pretty much every other country in the world, are much more important to Taiwan's vitality," he said.