TOKYO • Within 12 hours of being assured a big win in the Oct 22 general election, Japanese Prime Minister Shinzo Abe was on the phone with United States President Donald Trump.

The duo have grown close over four bilateral meetings and many more phone calls since Mr Abe broke protocol to meet Mr Trump before he was sworn in, gifting him a gold-coloured golf driver.

They will tee off on the greens this Sunday in their next round of golf diplomacy, this time in Tokyo, where Mr Trump is making his first stop in Asia as President.

Much ink has been spilled in local media on the symbolism of this, given the much-vaunted US-Japan alliance. And top of their agenda will be a usual suspect: North Korea.

Both men have been in lockstep over the need to tighten the noose on the regime to make it curb its missile and nuclear programmes.

During his visit, Mr Trump will also meet the next of kin of Japanese victims kidnapped by North Korean agents, having denounced the act last month in a speech at the United Nations.

Another security issue on the agenda is ensuring a free and open Indo-Pacific region, given Chinese assertiveness. 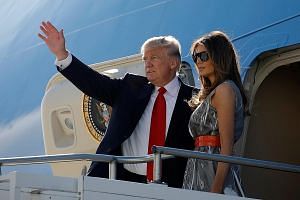 South Korea: All eyes on potential cracks in allies' united front against Pyongyang

US expert Yasushi Watanabe of Keio University noted that while this appeared to have taken a back seat over North Korea, the US has demonstrated its commitment to the region by holding four freedom of navigation operations in the South China Sea over five months.

Trade is also likely to be broached, though the duo do not see eye to eye on the issue. Mr Trump prefers bilateral deals while Mr Abe is in favour of multilateral pacts such as the Trans-Pacific Partnership - which the US has pulled out of.

Their deputies had met in Washington earlier this month to discuss trade, an issue which Dr Watanabe expects will lead to a protracted "negotiation tug-of-war".