KUMAMOTO (BLOOMBERG) - Tourist groups from China, South Korea and Taiwan, the three biggest sources of visitors to Japan, have scrapped trips to the quake-devastated Kyushu region and travel agencies are anticipating further cancellations.

The blow to tourism coincided with Japan's peak spring travel season, with carriers including Korea's Asiana Airlines, Hong Kong Airlines and China Airlines cancelling flights to Kumamoto after the southern prefecture was struck by a series of earthquakes since last Thursday (April 14).

The death toll had risen to 44 with more than a thousand people injured as of Tuesday morning (April 19), according to the Fire and Disaster Management Agency.

Hana Tour Services Inc., South Korea's largest publicly traded tour agency, has cancelled all its Kyushu tours up to April 22, and will waive charges for those who drop out until April 30, according to a spokesman. 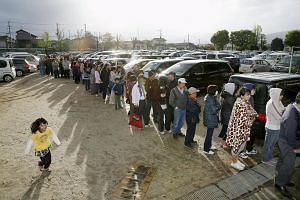 Japan quake survivors struggle with shortage of food and water

A branch of Beijing-based China International Travel Service Corp. has aborted Kyushu tours scheduled for April 21 and 29 and will offer refunds to those who cancel.

"Tourism will be hit not just for that area but there will be a spillover effect on the rest of Japan as well," said Ms Mariana Kou, an analyst at CLSA Ltd.

"The average Chinese tourist won't have a good knowledge of the geography of Japan, they will just feel that they should stay away from Japan for now."

Japan had seen a rebound in tourism since a bigger earthquake which struck in 2011 and triggered a nuclear disaster. The travel boom has been a bright spot in an economy struggling to sustain growth, as the double-digit surge in visitors annually since 2011 boosted hotels, retailers and sales of everything from tour buses to contraceptives.

China tourists made up the largest group of visitors to Japan, accounting for five million of the record 19.7 million who went to the country last year, according to the Japan National Tourism Organisation.

At the 400-year-old Kumamoto Castle, ranked by Tripadvisor as number one on a list of things to do in the prefecture, parts of the surrounding stone walls and ornate tiered-towers have collapsed.

Built in 1601 by a feudal warlord, the site is one of the most famous castles in the country, according to the Japan National Tourism Organisation.