A Japanese railway company has apologised after one of its train departed 25 seconds early, a mistake which it told commuters was "truly inexcusable".

West Japan Railways (JR West) last Friday (May 11) issued a statement after a train at Notogawa Station in Shiga Prefecture, which was running on the Biwako Line, mistakenly left the platform at 7.11.35am, reported Japanese website SoraNews24.

This meant that the train was 25 seconds too early from its scheduled departure time of 7.12am.

"The great inconvenience we placed upon our customers was truly inexcusable," JR West said in its statement.

According to SoraNews24, the conductor had thought that the train was supposed to depart at 7.11am, which was when he closed the doors to the 12-car train.

When he realised his mistake almost immediately, he glanced at the platform but did not notice anyone there.

He decided against reopening the train doors and pulled away from the station, as it could have resulted in the train leaving later than 7.12am.

However, there were a few people on the platform who had been hoping to catch the train after all, and one of them told a station attendant about the train's early departure.

The commuters waited six minutes for the next train, which terminates at Nishi Akashi Station in Hyogo Prefecture. 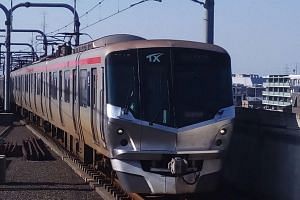 JR West issued an official apology after the word got to its headquarters.

"We will be thoroughly evaluating our conduct and striving to keep such an incident from occurring again," it said, adding that staff would be getting extra training following the incident.

This is not the first time a train company in Japan has apologised for moving off too early.

In November 2017, a train from Tokyo to the eastern city of Tsukuba departed 20 seconds early, prompting the operator of the Tsukuba Express to issue an official apology, even though there had been no complaints from commuters.

Japan trains are recognised as among the most reliable in the world, with people often planning their commute to a tee.

Hence, missing a train could cause them to miss other transfers on the way to their destinations, which may result in them being late for work or school, local media said.