HONG KONG - The first batch of anti-extradition protesters have been charged with rioting for their alleged role in last weekend’s (July 28) protests.

Braving the rain and a looming storm, hundreds of people gathered in the eastern part of Hong Kong island, outside the Eastern Magistrates’ Court at around 9am to show their support.

The 44 people - 28 men and 16 women - are the first to be charged for one of the most serious public order offences in the city since protests over a contentious extradition Bill started in March. Rioting carries a jail term of up to 10 years.

Many of those charged are students, the youngest being a 16-year-old girl. The rest include a pilot, teacher, nurse, chef and clerks, while some were unemployed. One of them faced an additional charge of assaulting police.

An arrest warrant was issued for clerk Yan Hoi-ying, 22, who was not present in court.

The other 43 are all out on bail of HK$1,000 (S$175) bail. Many were issued a curfew between midnight and 6am. All but the pilot was banned from leaving Hong Kong.

The case has been adjourned to Sept 25.

As they walked out of the court house under a sea of umbrellas, supporters chanted, “Hong Kong, ga yau”, a form of encouragement that means “come on, Hong Kong”.

Separately, a 24-year-old man was charged with possessing an offensive weapons, an extendable baton. He was also released on HK$1,000 bail and was given a midnight curfew.

Amid chants of “release the martyrs” and “there are no rioters, only despotism!” in Cantonese, student Annie Kwong, 16, told The Straits Times she came to show support for those she called her “comrades”.

“I hope that we can be here to show our support so they won’t feel as afraid,” she said, adding that she hoped that those charged with rioting can be released on bail and not have to stay in jail till the day of their trial.

Asked where the accused persons get the bail money from, Ms Kwong said there were pro bono lawyers and crowdfunding was being done online.

A resident, who wished to be known only as Mr Mok, who lives in Sai Wan Ho where the court is located, said the conflict between the protesters and the government “can be settled”.

“They will be able to settle everything soon I think,” the retiree who is in his 60s told ST, adding that “everyone just needs to sit down and talk”.

Separately, the head of Education University, Professor Stephen Cheung on Wednesday said he has written to Chief Executive Carrie Lam to urge her to completely withdraw the now-suspended extradition Bill - a gesture that would pave the way for a dialogue.

Prof Cheung, the first head of a University in the city to do so openly, said: “The government should take the lead to sincerely listen to the views, voice and aspiration of Hong Kong people. That’s why I wrote to the Chief Executive a few days ago suggesting the government should formally hold a complete withdrawal of the Bill.”

Also weighing in was former Hong Kong leader Tung Chee-hwa, who on Wednesday blamed “foreign forces” in Taiwan and the United States for the unrest in Hong Kong.

Speaking at his pro-government Our Hong Kong Foundation think tank, Mr Tung said “a small number of people are abusing the government’s leniency, and use violent means to challenge Hong Kong’s economy and social order, and to damage the relationship between the central government and the territory”. 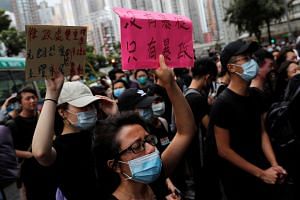 Hong Kong is a flashpoint in the new cold war

He urged Hong Kongers to be vigilant, adding that protesters’ slogans have changed into talk about revolution and “reclaiming Hong Kong”.

Hong Kong has been hit by eight straight weeks of mass protests, some of which ended in violence, the latest of which was last Sunday when entire streets were left shrouded in tear gas.

This, after police were locked in street battles with protesters who deviated from an approved rally site, spilling out into several districts, including Sai Ying Pun, where Beijing’s liaison office in Hong Kong is located.

The police on Tuesday night said they arrested 49 people on Sunday, comprising 32 men and 17 women aged between 16 and 41. Among the group was a 33-year-old man who also faces one count of assaulting a police officer.

They stressed that an investigation is underway, and would not rule out the possibility of more arrests.

The same night, hundreds surrounded two police stations in the northern part of the city, with police clashing with protesters outside one of the buildings where those arrested were held.

About 200 people surrounded Kwai Chung Police Station on Tuesday evening, defying mild typhoon weather, holding up umbrellas as they chanted for the police to release those detained, while some pointed laser beams at the police building.

Police in riot gear eventually rushed out of the building, charging and pepper spraying protesters in a bid to disperse the crowd.

At Tin Shui Wai Police Station, close to the Chinese border, hundreds surrounded the building into the wee hours to protest, sparked by the arrest of two young individuals at a Lennon Wall - one of the ubiquitous walls covered in Post-Its that have been popping up around the city.

At least six were injured after people in a passing car threw fireworks at protesters who were still lingering outside the police station in the wee hours of Wednesday.

Meanwhile, the police are under investigation by the city’s anti-corruption watchdog for their response during an attack on commuters and passers-by on July 21 in Yuen Long.

Gangs of men clad in white and armed with sticks had rampaged through the Yuen Long metro station, injuring some 45 people. The police were criticised for their delayed response to the attacks.

The series of protests were sparked by a controversial Bill which would have allowed the extradition of criminal suspects to mainland China but have since evolved into a movement calling for greater democratic reforms.

The protesters said that the legal system in China is opaque and feared suspects extradited to China would not get a fair trial.