HONG KONG (BLOOMBERG) - Hong Kong workers prepared to go home early on Wednesday (July 31) as a tropical storm drew nearer to the city, which has been wracked by protests for weeks.

The Hong Kong Observatory raised storm signal No. 8 at 1.40pm local time, which prompted the closure of the city's stock exchange as well as businesses and some public transport.

Trading on Hong Kong's exchange was suspended 15 minutes after the signal was raised, according to its rules. The MSCI Hong Kong Index was down 1.1 per cent.

Airlines including Cathay Pacific Airways and Hong Kong Airlines have warned passengers of potential flight delays or cancellations as the storm approaches.

Hundreds of workers are trying to get onto trains in the central business district before bus and ferry services are suspended. Roads were jammed with traffic as workers sought to get home early.

Hong Kong Chief Executive Carrie Lam said on Tuesday that there is "no room for optimism for the second quarter and the entire year", according to a government statement citing her remarks at a luncheon. 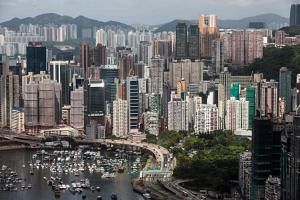 Wednesday's weather disruption comes at a particularly bad time for Hong Kong. Eight consecutive weekends of unrest in the city have driven away tourists and forced retailers to close some stores in the city's busiest areas, hitting sales of jewellery and cosmetics. It has also affected landlords' ability to raise rents.

"Lots of stocks, especially heavyweights, are being sold off, including developers and consumer-related stocks," said Mr Castor Pang, head of research at Core Pacific-Yamaichi International in Hong Kong. "That's a signal that many long funds are pulling out of the market."

The stock declines reflect growing frustration over Hong Kong's political impasse. Investors on Monday sold the city's shares at the fastest rate in more than six weeks, after protesters clashed with police for an eighth weekend.

Traders are worried the violence will disrupt the local economy, and a rare press briefing by Beijing did little to ease their concerns.

The MSCI Hong Kong gauge headed for its lowest close since June 18. It is down 2.7 per cent this month as protests intensified.