HONG KONG - Police in Hong Kong used pepper spray and batons on Tuesday night (July 30) to try to disperse protesters who clashed with riot police outside a police station.

About 200 demonstrators clashed outside the Kwai Chung Police Station with riot police, after gathering there to call for the release of their comrades, many of whom are being held at the station after being charged with rioting for a previous violent protest on Sunday.

Some of the protesters pointed laser beams at the police station during the clashes.

Police later retreated back inside though some protesters continued to linger around.

Hong Kong police earlier on Tuesday charged 44 people with rioting after a protest spiralled into chaos on Sunday (July 28),  in what would be the first batch of protesters to be charged with one of the most serious public order offences in the city.

Separately, a 24-year-old man stands accused of possessing offensive weapons, according to a press statement issued by the police.

Rioting carries a jail term of up to 10 years. Among the 44 charged with rioting is a 33-year-old man who also faces one count of assaulting a police officer.

The authorities said they arrested 49 people on Sunday, comprising 32 men and 17 women aged between 16 and 41.

Two men were released on bail pending further investigations, while another two were temporarily released.

Those facing charges will appear in the Eastern Magistrates’ Court on Wednesday morning.

The charges, a rare move in the city, come after an illegal assembly in the Western District of Hong Kong Island on Sunday.

A group of anti-extradition protesters had blocked roads along Connaught Road West and Des Voeux Road West near Western Street.

Police said the protesters had set up roadblocks using umbrellas, wooden planks, bamboo sticks and railings. They attacked officers at the scene with lethal weapons such as bricks and sharpened iron rods after they prised up pavement bricks, demolished roadside fences, and damaged street signs and lamp posts. 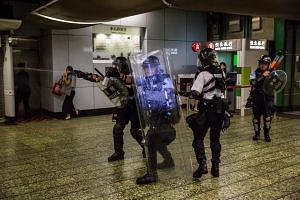 After repeated warnings were ignored, the police undertook dispersal action at about 7pm to restore social order.

Police stressed that an active investigation is underway and would not rule out the possibility of further arrests, according to the statement released on Tuesday night.

Hong Kong has been hit by more than seven straight weeks of mass protests, some of which ended in violence.

The protests were sparked by a controversial Bill which would have allowed extraditions to mainland China.