Sunday’s vote was triggered after Beijing forced the disqualification of six rebel lawmakers who had swept to victory in citywide elections in 2016.

Four of the six vacant seats were contested in the tense by-elections which saw China loyalists hurl insults at young democracy activists near a polling station.

After the count ended Monday morning the democracy camp had only managed to take back two of the four seats. It now holds a total of 26 seats in the 70-strong partially elected legislature.

That means the democrats have bolstered their ability to block some important Bills, which require two thirds to pass.

However they will continue to be outgunned on other Bills that require a lower threshhold as they failed to regain the veto power they lost due to the disqualifications.

Activists accused Hong Kong’s pro-Beijing government of political screening after it barred young pro-democracy leader Agnes Chow from standing in the by-elections because her party advocates self-determination for Hong Kong. 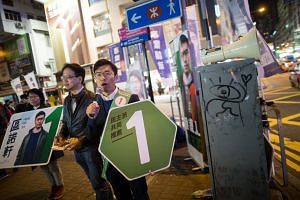 Chinese authorities are incensed at the emergence of activists advocating independence and also views calls for self-determination as part of a dangerous splittist push.

The vote came on the day the Chinese Communist Party decided to give President Xi Jinping a mandate to rule for life, intensifying fears that Hong Kong’s freedoms will come increasingly under threat.

“Winning isn’t just about me but others in the democratic camp. I’m tired but grateful for the help from my team,” Au told AFP.

However he described his feelings as “half half” because they camp had not regained all four seats.

All were removed from their posts for inserting protests into their oaths of office after an intervention by Beijing.

The legislature is fundamentally weighted towards Beijing as only half the 70 seats are elected.

The rest are selected by traditionally pro-establishment interest groups.

After the landmark 2016 vote the democracy camp held a majority of the directly elected seats, meaning it had the power to veto Bills which need 50 per cent of that block to pass.

After the disqualifications the democrats lost that veto power and failed to regain it in the by-elections.

It is the latest blow for the democrats who have come under increasing pressure after the failure of 2014’s mass Umbrella Movement to win political reform.

Some leading activists have been jailed on protest-related charges and democracy campaigners fear the space for open political debate is seriously under threat.