Following her win,  Ms Tsai, who is chairman of the Democratic Progressive Party (DPP), said she would strive to maintain stability in relations with China.

"I will build consistent, predictable and sustainable cross-strait relationship," Ms Tsai said as she claimed victory at the DPP’s headquarters in Taipei.

"I also want to emphasise that both sides of the strait have a responsibility to find mutually acceptable means of interaction that are based on dignity and reciprocity," she said.

“Our democratic system, national identity and international space must be respected. Any forms of suppression will harm the stability of cross-strait relations,” she added.

China's determination to protect its territory and sovereignty was "hard as a rock", the office said in a statement released via the official Xinhua news agency.

Ms Tsai's victory came on the day that outrage erupted over the treatment of 16-year-old Taiwanese K-pop star Chou Tzu-yu who was reportedly forced to record a video apology after angering Chinese netizens by flying a Taiwanese flag in a recent online broadcast. 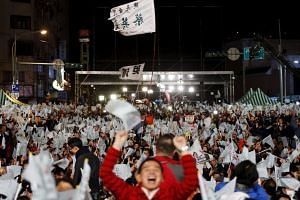 US says it has profound interest in peace between China, Taiwan

Ms Tsai said in her speech that Chou's case had “shaken Taiwanese society”.

“This particular incident will serve as a constant reminder to me 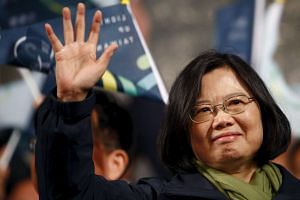 about the importance of our country’s strength and unity to those outside our borders,” she said.

In her victory speech, Ms Tsai said Taiwanese had made history with their ballots, realising the third transition of political power and the first transition of legislative majority.

"We have yet again shown the world that we are a democratic country. Democracy is deeply ingrained in us," she said. "I thank Eric Chu and James Soong for showcasing the spirit of democracy. Their critique and suggestions will serve as motivation for my presidency."

Ms Tsai said her party has had effective communications with the United States in the past and she hopes to continue with that.

She also said that she will continue to develop good relationships with Japan despite the Diaoyu/Senkaku disputes in the East China Sea. 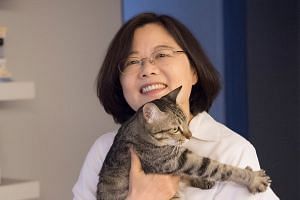 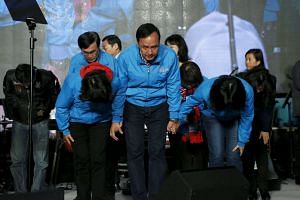 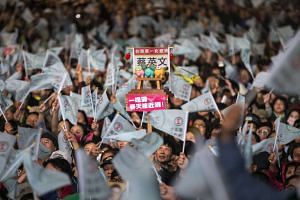 Relive the drama of Taiwan's elections

Earlier, Mr Chu said in a speech in Taipei that he failed in his campaign to succeed President Ma Ying- jeou and that the KMT would also lose its majority in the Legislative Yuan.

He announced that he would step down as the KMT chairman.

"I am sorry, I have let you down. We have failed. We did not work hard enough," Mr Chu said, surrounded by sombre-looking supporters.

Ms Tsai arrived at the DPP headquarters in Taipei at 4.15pm, to track the counting of votes after polls closed at 4pm.

In an interview with Time magazine last year, the youngest of nine children recalled how she was "not considered a kid that would be successful in my career".

Ms Tsai's win means that she is Asia's first woman leader who is not related or affiliated to a political dynasty.

She is also likely to make waves - one met with some trepidation - in cross-strait relations.

Unlike her predecessor, Mr Ma  of the KMT, she has not endorsed the so-called 1992 Consensus which recognises that there is one China but with differing interpretations.

The DPP advocates formal independence for the self-governing island, which Beijing considers to be its territory.