BEIJING - China is set to change its Constitution to remove a two-term limit on the presidency, making it possible for President Xi Jinping to remain in office beyond his current term in 2023.

Top Chinese Communist Party (CCP) officials have proposed to remove the expression that the President and Vice-President “shall serve no more than two consecutive terms” from the country’s Constitution, the official Xinhua news agency said on Sunday (Feb 25).

The lifting of the restriction means that Mr Xi need not step down after 10 years in office, unlike his immediate predecessors, Mr Hu Jintao and Mr Jiang Zemin.

Analysts say overturning the term limit is yet another indication of Mr Xi’s dominance in the power structure, where he could move to  break with a tradition in place since the 1990s. It also elevates him as a leader on a par with Mao Zedong and Deng Xiaoping.

“This is a significant change where there is bound to be some kinds of resistance. But he has clearly overcome them,” said Professor Steve Tsang of the School of Oriental and African Studies, University of London.

Prof Tsang noted that there is no compelling need to make such a change to the Constitution as the existing rules does not stop Mr Xi from staying on as the CCP’s general secretary after his presidency ends in 2023.

“The real power in China is in the general secretaryship. (The presidency is) largely a ceremonial role. It is not where the real power is,” said Prof Tsang.

The only difference is that Mr Xi would no longer be able to make state visits without the presidential title. 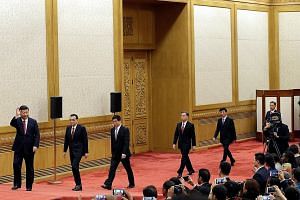 There is no term limit as well on his tenure as the nation’s military chief by virtue of him being the head of the party’s Central Military Commission.

Xinhua on Sunday reported that the officials also proposed to write Mr Xi’s political theory - Xi Jinping Thought on Socialism with Chinese Characteristics for a New Era - into the country’s Constitution, following a similar move to enshrine it in the CCP charter last October. This is expected to  be formally passed at the annual parliamentary session next month.

The Xinhua reports of the proposed changes came ahead of a three-day meeting of top officials from the CCP Central Central Committee starting Monday (Feb 26) and analysts said they indicate that the 64-year-old Chinese leader, who is in good health, is poised to stay in power for another 10 years until 2028.

Hong Kong-based political analyst Willy Lam said the theoretical justification for the long tenure is for Mr Xi to help realise the Chinese dream of turning the country  into a leading global power by 2050.

“Since 2050 is a long time away, he will need to stay in power for as long as possible,” said Dr Lam.

But Prof Tsang said the changes could also mean that it will be increasingly difficult for Mr Xi’s lieutenants to contradict him and the scope for policy debates will be reduced.