BEIJING (AFP) - China's state broadcaster has questioned the authenticity of the video of Syrian boy Omran which went viral worldwide, alleging it may have been faked as part of a Western "propaganda war".

The video showed the stunned-looking four-year-old covered in blood and dust after an air strike in Aleppo last week, with the US State Department calling the child "the real face" of the Syrian war.

Beijing supports the Syrian government led by Bashar al-Assad and is close to Russia, both of which have carried out strikes on rebel-held areas of Aleppo.

China's official broadcaster CCTV questioned the video of Omran in a weekend report, showing the harrowing footage with the subtitle "Video suspected of being fake".

"Critics have suggested that (the video) is part of a propaganda war, aimed at creating a 'humanitarian' excuse for Western countries to become involved in Syria," the voiceover to Saturday's report said.

"The workers did not make rapid rescue efforts, and instead quickly set up a camera," it added.

Such accusations by Chinese media are not unknown. The official news agency Xinhua has previously accused the Tibetan government in exile of issuing fake videos.

Omran, his siblings and parents were all plucked from the rubble following Wednesday's bombing on the Qaterji neighbourhood in rebel-held east Aleppo.

In video footage Omran is seen quietly staring into space in an ambulance, before raising his arms to touch his bloodied forehead, then looking at his hand and wiping it on the orange seat. 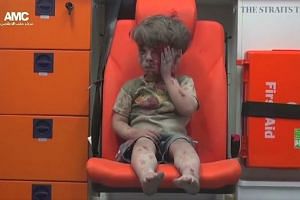 Brother of Syrian boy pictured in Aleppo dies of his wounds 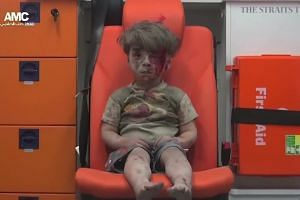 Russia denied carrying out the attack.

The CCTV report alleged that the Syrian Civil Defence group which shot the video, also known as the "White Helmets", is of "questionable independence" and has links to the British military.

As well as bringing worldwide attention to the plight of children in the bloody siege of Aleppo, Omran's image has sparked diplomatic disagreement.

The Syrian conflict has left more than 290,000 people dead and displaced millions since it began in 2011 with the brutal repression of anti-government demonstrations.