With autumn nearly over and winter just around the corner, the Beijing-Tianjin-Hebei cluster has seen four bouts of smog since the start of October. The cluster includes 28 major cities in the Beijing and Tianjin municipalities, and Hebei, Shandong, Shanxi and Henan provinces.

The air quality in the Chinese capital improved on Thursday, but grey skies are forecast to return on Friday.

Online travel agency Qunar said on Wednesday that Beijing residents are preparing for trips to cities in southern China to escape the worsening smog and chilly weather. The company said searches for flights from the Chinese capital to the southern provinces of Hainan and Yunnan had risen rapidly since Tuesday.

In particular, searches for flights to Lijiang in Yunnan had increased by 50 per cent compared with the last month. Flights from Beijing to Hainan's Sanya have been the second-most popular search topic on the Qunar platform for two consecutive days, behind only to flights from the capital to Shanghai.

Ctrip, another online travel agency, said searches using the words "escape the smog and cold weather" have risen by over 300 percent on its platform since Tuesday. Sanya, Lijiang and Xiamen in Fujian province were the top three destinations for Beijing travellers.

The national observatory has warned that the unfavourable weather conditions, including the lack of wind, will persist in the coming winter months. The region tends to experience its heaviest pollution during the heating season from November to March.

Weather conditions this year mean that the situation will be "grim", according to authorities and officials. The sources say meteorological conditions, such as wind speed, will continue to play a decisive role in air quality for a long time.

Chai Fahe, deputy director of the National Joint Research Centre on Air Pollution Causes and Control, said weak wind from the south and high humidity in the region are to blame for the heavy smog.

He added that the northern parts of the country have entered the period of highest emission, as heating services officially begin on Thursday.

A stable atmosphere and a temperature inversion, which prevents the normal churn of the atmosphere, has occurred in many cities in the northern parts of the country.

The region is home to a high concentration of heavy industries.

Starting on Thursday at noon, cold fronts will gradually clear the haze from north to south, ending the current bout of smog in most areas in the region, the China National Environmental Monitoring Centre said. 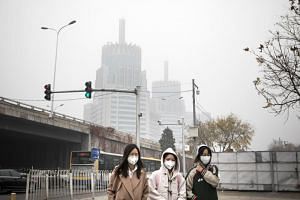 Beijing's worst air in over a year engulfs buildings in smog

Beijing to shut 1,000 manufacturing firms by 2020 to combat smog, boost income in nearby regions

But the respite will be short-lived as some areas may be stricken by mild pollution from Friday to Sunday, it said.

Under Beijing's three-tier warning system, the yellow alert is the least severe, followed by orange and red.

The alerts will trigger a series of compulsory emergency responses that can include the suspension of outdoor construction operations to reduce dust, the restriction of heavily polluting vehicles and the suspension of production at smokestack industries.

The Ministry of Ecology and Environment has sent a notice to the governments of Hebei, Shanxi, Shandong, Henan and Shaanxi provinces, as well as to Beijing and Tianjin, urging them to take emergency response measures, including production restrictions, to help curb the pollution.

This year, China's Ministry of Ecology and Environment, the country's top environmental authority, has set a goal to reduce the average intensity of PM2.5, a major air pollutant, by three per cent year-on-year from Oct 1 to March 31 in the Beijing-Tianjin-Hebei cluster.

The goal last year was set at a year-on-year cut of 15 per cent.

"It's very stressful to achieve this (year's) goal. The task is very arduous," said Liu Youbin, a spokesman for the ministry.

He denied that the reduction in the target means efforts have eased this year, adding: "That's a misunderstanding of the action plan."

The progress made on pollution control during autumn and winter months last year was due not only to government efforts, but also to favourable weather conditions.

Experts' calculations show that favourable weather conditions contributed to one-third of the improvement, or 8.5 per cent of the decrease in PM2.5 density, Liu said.

The average PM2.5 density in the cluster stood at 78 micrograms per cubic meter last autumn and winter, down by 25 per cent year-on-year, according to the ministry.

Ai Wanxiu, chief forecaster at the National Climate Center, said China will generally experience a warmer winter than in recent years. Such atmospheric conditions and weak cold air from the north will make it difficult to disperse pollutants.

According to Wang Jinnan, head of the Chinese Academy for Environmental Planning, coal consumption in Beijing, Tianjin, Hebei, Henan, Shandong and Shanxi comprises 33 per cent of the national total, despite these areas occupying only 7.2 per cent of the country's territory.

A total of 28 per cent of crude oil is also processed in the region.