BEIJING (REUTERS) - China on Wednesday (Aug 31) advised its citizens in Kyrgyzstan to avoid going outside or visiting crowded places, after a suspected suicide car bomber rammed the gates of the Chinese Embassy in its capital, Bishkek.

The attacker died and at least three people were wounded in the Tuesday blast. Officials from both countries described the assault as a terrorist act.

In a short statement on its website, China's Foreign Ministry said the government had asked Kyrgyzstan to take steps to protect Chinese nationals and organisations and bring those behind the attack to justice.

The embassy is advising people to exercise caution about visiting Kyrgyzstan and those who are there should be on alert, the ministry said.

"(We) remind Chinese citizens and organisations in Kyrgyzstan to be on high alert, increase necessary security measures and response preparations, go out as little as possible and not go to crowded places," it said. 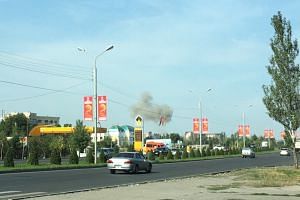 "We will work with the Kyrgyzstan side to quickly ascertain specific information on the people and organisations that carried out this terrorist attack," she said.

The authorities in Kyrgyzstan, a mostly Muslim former Soviet republic of six million people, routinely detain suspected militants they accuse of being linked to Islamic State, which actively recruits in Central Asia.

A Turkish official said in June that one of three suspected Islamic State suicide bombers involved in a deadly attack on Istanbul's main airport was a Kyrgyz national.

An anti-Chinese militant group made up of ethnic Uighurs - a Turkic-language speaking, mainly Muslim people living in China's Xinjiang region - is also believed to be active in Central Asia.

Some security experts have questioned the Uighur group's cohesiveness, however, and say China's policies in Xinjiang, where hundreds have died in recent years in unrest blamed by Beijing on Islamist militants, have contributed to the unrest.

In 2014, Kyrgyz border guards killed 11 people believed to be members of that group who had illegally crossed the Chinese-Kyrgyz border.