SINGAPORE - More than 200 records were broken around Australia during its hottest summer on record, a study released on Thursday (March 7) said.

The three-month summer in 2018-2019, which officially finished at the end of last month, roasted much of the country in a series of crippling heatwaves that triggered blackouts, fuelled conditions ripe for huge bush fires and worsened an already severe drought in the eastern half of the nation.

Temperatures soared to as high as a record 49.5 deg C in Port Augusta in South Australia on Jan 24 and 46.6 deg C the same day in Adelaide, said the Climate Council report titled The Angriest Summer.

During successive heatwaves over the summer, scores of people were treated for heat-related illnesses, particularly the elderly and the young. Many businesses were affected, as temperature extremes made work during the day hazardous to health.

"In Melbourne, the Australian Tennis Open had to implement its new extreme-heat policy, postponing matches as temperatures soared," she said in a media release.

Climate change was cranking up the intensity of extreme weather, and as mankind continues to pump more pollution into the air from burning fossil fuels, those extremes are set to intensify, said authors of the study. 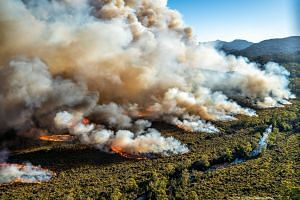 'Hundreds of thousands' of cattle feared dead after Australia floods

During the past summer, every state in Australia experienced serious bush fires, with properties lost in Queensland, New South Wales, Victoria and Tasmania, the report said.

The Queensland fire season lasted much longer than normal and the Tasmanian fire season started early. New South Wales was hit by serious fires even through autumn and winter.

"It was the warmest January on record for Australia in terms of mean, maximum and minimum temperatures. The national mean temperature was 2.91 deg C above average," the report said.

While most of Australia endured sweltering conditions, northern Queensland was hit by record rainfall and floods. For example, Townsville in the state's north-east received 1,257mm of rain over 10 days in late January and early February, more than its annual average rainfall, triggering flooding that caused about A$1 billion (S$955 million) in insured losses.

The Climate Council criticised the Australian government for the lack of leadership on climate change and the lack of credible policy to reduce greenhouse gas pollution.

It pointed to government data that shows the nation's total greenhouse gas emissions rose for the past four years, despite the growing risks from climate change to the economy, society and environmental icons such as the Great Barrier Reef.

"Right now, the Federal Government has no credible policy, and pollution has gone up and up and up," Ms McKenzie said.